ROME – While odd couple Mary Matalin and James Carville rarely agree on anything, they agreed Thursday that Berry College is a special place.

The married political contrarians — she a conservative Republican and he a liberal Southern Democrat — were invited guests to the 2014 Gloria Shatto Lecture series. The series was named after Shatto, who made history on Jan. 1, 1980, when she became the first woman to become president of a university or college in Georgia. She retired in 1998 and then passed away a year later.

“What an amazing place,” Matalin said, adding that she and her husband visit many college campuses. “I don’t think we have visited one as unique.”

Carville was especially moved by what he experienced at Berry – seeing the focus being placed on students rather than on alumni or major donors or staff members.

He was particularly impressed when Berry President Stephen Briggs turned over the task of introducing Matalin and Carville to two students — Cassy Horn, a senior majoring in government who is chairwoman of Berry College Republicans; and Sydney Hulebak, a senior communications major who is a college participant in the Clinton Global Initiative, promoting her social entrepreneur website that will be launched in about a week —lionsthread.com. 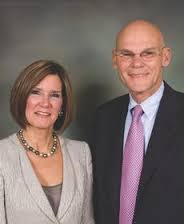 “What I find distinctive…here students introduce the speaker,” Carville said. “That’s a unique thing in higher education – that you put the students ahead of everybody else. That’s not always the case. That’s hardly ever the case. I find that much more impressive than how many acres you have. It’s a place where you are producing human capital.”

For the record, Berry has the world’s largest contiguous college with more than 27,000 acres of woodlands, meadows and streams.

Matalin and Carville have been together for 23 years, perfecting their “opposites attract” shtick on television, books and the speaking circuit. And while they did banter back and forth to live up to their oil and water reputation, they did seem more subdued than normal.

In fact, Carville addressed most of his comments to the students — saying young people should not be turned off politics because of the extreme positions from both sides of the political spectrum.

“There’s a troubling thing about discourse. If young people see that and determine that they don’t want to go into public life or public service, we have lost, we have lost everything,” Carville said.

Although there are some folks who have entered politics for the wrong reasons, Carville said he was proud of having devoted much of life to public service.

“At some point we need to tell people: ‘I’m proud of what I did. I’m proud my wife worked in the White House.”

He said they must be sure not to become members of PAVE – people against virtually everything.

It’s a fascinating world out there,” he said. “Be aware of the world around you.”

If they choose not to try to learn as much as they can about what is  going on and only be absorbed with their own surroundings, “what a dismal, dull uninteresting life that would be.”

Carville also urged students to get their information from many different sources rather than from media organizations that tend to offer just one point of view.

“Everything becomes reinforced,” Carville said. “You use information like a drunk uses a lamp post — for support. The more information we have, the less we know.”

The audience of hundreds gathered in the Berry gym were interested in how they managed to stay together in spite of their political differences.

Matalin said that they both respected each other’s positions, and they were able to disagree with demonizing each other or their friends and colleagues.

“I love my husband and always did even though he’s wrong so much of the time,” she said, adding that even after 23 years, she still learns something new about him every day. “We are anything but indifferent toward each other.”

Carville then spoke to the crowd in language they could understand.

Then before leaving the podium, Carville gave one last shout-out to Berry.

“It’s the students who matter at Berry,” he said. “You’ve got that here.”

To readers, in the interest of full disclosure, I serve on Berry College’s Board of Visitors.