Atlanta Mayor Keisha Lance Bottoms has no immediate intent to penalize individuals who break the social distancing laws, she said Thursday in response to a question by Atlanta City Councilmember Michael Julian Bond. 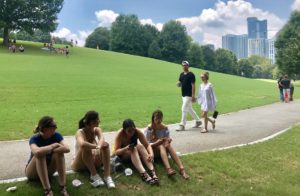 Visitors to Piedmont Park are not practicing social distancing, as required by an order in Atlanta, according to Atlanta City Councilmember Michael Julian Bond. Credit: Kelly Jordan (Photo predates pandemic)

Atlanta’s city code establishes a penalty for violating the city’s stay-at-home order. Violations are punishable by a fine of up to $1,000 and up to six months in jail.

The exchange between Bond and Bottoms occurred during a teleconference involving the mayor and members of the Atlanta City Council. Bond prefaced his remarking by advising the mayor that he has concerns about crowds that ignored social distancing guidelines as they gathered along the Atlanta BeltLine and in Piedmont Park, which he said he had visited in recent days. 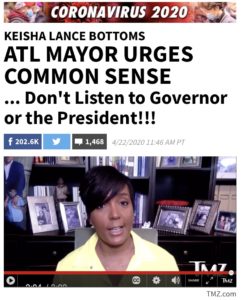 Mayor Keisha Lance Bottoms said on TMZ that her strict rules about stay-at-home during the pandemic extend to children in her own household. Credit: tmx.com

The timing of the exchange coincides with Bottoms’ rising presence on the national stage. Bottoms appears to be positioning herself as a Democratic mayor opposed to Republican-led initiatives on the virus, and as a potential member of a Joe Biden presidency – with her name joining that of former gubernatorial candidate Stacey Abrams as a possible running mate. 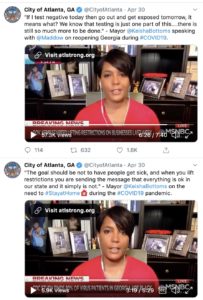 Atlanta Mayor Keisha Lance Bottoms’ has taken an increasing role in the discussion related to governance related to the COVID-19 pandemic. Credit: atlantaga.gov

The mayor has not exercised authority to impose penalties for violating her executive orders related to COVID-19. The mayor’s declaration of an emergency situation within the city has been ratified by the city council.

A violation of any provisions of the order is punishable by a fine of up to $1,000 and up to six months in jail, or home confinement, or work on any of the city’s public works projects, according to the citation in Atlanta’s code of ordinances.

Bottoms’ emergency order does not contain the language about penalties.

The order does note the mayor has the authority to impose a curfew and to “close city streets and sidewalks and to delineate areas within the city wherein an emergency exists.”

Previous Article
How Atlanta Housing, partners roll with the punches of the pandemic
Next Article
Atlanta’s 1918 pandemic: Fresh air rocks, but don’t forget your mask