By Guest Columnist CARDEN WYCKOFF, on behalf of the Save Share Peachtree Coalition Organizing Committee

At 9:55 a.m. on March 10, minutes after receiving official notice that the Peachtree Shared Space demonstration project was being removed, I tweeted: 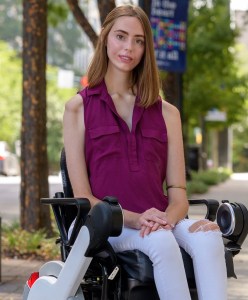 “@ATLPlanning @ATLDOT will uninstall the Peachtree demonstration project during the week of March 14th. Removal of all tactical urbanism materials – wheel stops, flex posts, planters, signage – from the roadway to restore it to its previous configuration.”

The dismay online was immediate, the hue and outcry enormous.

By the next day, an extremely online group of us had begun meeting, strategizing, eventually launching a website savesharepeachtree.org, issuing a press release, circulating a petition, and organizing a protest. Within 72 hours, a tweet had grown into a movement. On a beautiful spring afternoon, March 14, 70 sign-waving, chanting protesters showed up at the corner of Peachtree Street and Andrew Young International Boulevard, garnering attention from passersby and local media.

With 86 traffic fatalities across the City of Atlanta in 2021, I fear for my safety crossing any intersection in my wheelchair. For the all too brief 260 days the demonstration was in place, the Peachtree Shared Space was one of the few places in the city I felt safe crossing. Indeed, the demonstration recorded an average increase of 27 percent of pedestrians and a decrease of 11 percent in the total number of vehicles, and a 2 to 3 mph decrease in overall vehicular speeds. 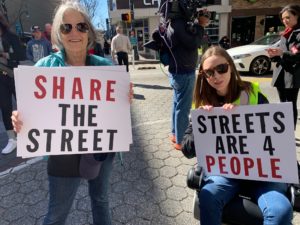 Sally Flocks (left), founder and former president of PEDS, and Carden Wyckoff, of the Save Share Peachtree Coalition Organizing Committee, at the March 14 rally for the Peachtree Shared Space project. (Photo by Kelly Jordan)

When Atlanta Mayor Andre Dickens, the self-proclaimed “Transportation Mayor,” was elected, I was curious to see how the Peachtree Shared Space would move forward and flourish. Mayor Dickens fashions himself a bold and progressive new mayor with great ambitions in the transportation realm, and there could be no better, no more surefire, opportunity for such a mayor to advance than this one.

The Peachtree Shared Space has been the result of a methodical planning, design, engagement, and demonstration process. It has been intentional, evidence-based, and well-documented. It features extensive public engagement (despite challenging pandemic conditions) and strong support from many downtown stakeholders.

Most importantly, the Peachtree Shared Space models and inspires the transformation of Atlanta’s public realm, beginning from the center of the city, from one that is enormously hostile, frankly fatal, to people, to one that is a true civic commons, full of people, life, and activity. During this period of remarkable growth in Atlanta, it is essential that we remake the downtown section of our signature street into a place for people and public life, a place that creates and sustains community and belonging.

Demolishing the demonstration, which was commenced by ATLDOT Commissioner Josh Rowan at the mayor’s direction, jeopardizes the desperately needed transformation of our deadly car sewers into vibrant public spaces for people. To stop now, to refuse to proceed as planned with Phase 2 and Phase 3 (the final design for a shared Peachtree Street), is to turn our backs on the future of our city as a place of belonging and community for people. 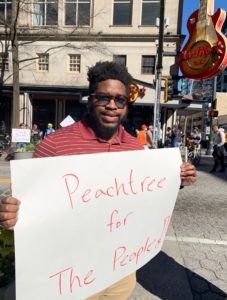 I am saddened when decisions at the highest level about our city are made with what appears to be only special interest groups in mind.

Throughout his campaign and his mayoralty thus far, Mayor Dickens’ favorite refrain has been: “I draw circles, not lines.” Now, the slogan of the Dickens administration is #MovingAtlantaForward.

Mayor Dickens, don’t draw a line against those of us who desire a Peachtree Street for the people of Atlanta. Move Atlanta forward today by directing the departments of City Planning and Transportation to begin Phase 2 of the Peachtree Shared Space as planned. There is no need for more data or further delay. Move Atlanta forward, and I can feel safe again on Peachtree Street, in downtown Atlanta, in the center of our beloved, beautiful city. 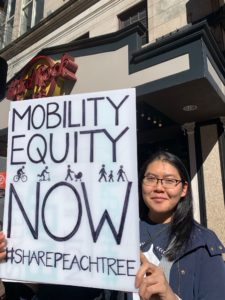 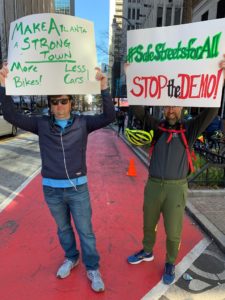 Carden Wyckoff is a disability advocate and Atlanta resident. She is a pedestrian and rides MARTA regularly to get around the city. She believes in building multimodal safe streets and transit equity.

Previous Article
What will it take to shake up America’s two-party political system?
Next Article
Eleanor Ringel predicts who will win Oscars on March 27