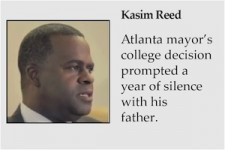 If you watched as Kasim Reed was sworn in as the 59th Mayor of Atlanta in 2010, you saw his parents proudly standing beside him. Their influence on Kasim’s life has been constant with only one major bump in the road – his decision to attend Howard University in Washington, D.C.

Kasim was faced with one of the major pivotal decisions a young student must face – where to attend college. The decision is difficult for many, but for Kasim, it wasn’t just the decision that was difficult. The larger hurdle was informing his father, June, short for Junius.

“When I grew up, my dad – for many years, certainly since I was a boy – wanted me to go to the University of Georgia in Athens – the state’s flagship institution,” Kasim said. “My dad – for as long as I can remember – wanted me to have a career in public service and politics.”

When it came time for the senior at Atlanta’s Westwood High School (now Westlake High School) to make his decision, his father sweetened the pot with added benefits. Attending school in Athens would also mean Kasim would get a car and his own apartment – hot commodities for any college-age adult.

“It appeared to be a voluntary decision until I went to him one evening and told him I wanted to go to Howard University in Washington D.C,” Kasim said. “My father was pretty upset,” he recalled and the two had what Kasim described to us when we filmed his Moment in the mayor’s ceremonial office as a “robust disagreement.”

“My dad had a very good vision of what he thought my life could be – he set very high standards and set very high expectations for me.” And it quickly became clear the vision did not include attending Howard. Not only did Kasim forfeit the car and the apartment, his father’s disapproval was so strong the two did not speak for a year. “He’s tough and I can be pretty stubborn,” the mayor said.

Despite that disapproval, Kasim set his eyes on Washington. “Going into the career of politics, it was ideal to be in the nation’s capital,” he said. His mother Sylvia drove him to the airport and walked him down to the terminal – both shedding tears – as they dragged the luggage that contained what the college freshman needed for his new life. With one last hug, Kasim boarded the Delta flight.

“The great thing about Washington is that if you have an interest, you can pursue it,” Kasim said. “There is almost no topic that you can have an interest in or a passion for that is not available in the nation’s capital.”

Howard University’s influence on Kasim proved to be invaluable as his political career stemmed from many of the relationships he formed at the university. In Washington, he had the opportunity to learn firsthand from those in the political arena. As a sophomore, he interned for Congressman Joseph P. Kennedy II, an experience that Kasim says helped shape his view of public service.

Not only was he networking in the city and the nation, he was heavily involved in his university. While serving as an undergraduate member of Howard’s Board of Trustees, he created a fundraising program still in effect today that has contributed more than $10 million to the university. In 2002, Kasim was appointed as the youngest general trustee of Howard University and remains a dedicated member of the board today.

“The exposure that I had being at Howard, the professors that I had, the experiences that I had there – being an undergraduate on the board of trustees – putting me in the company of some incredible women and men, many of whom are still in my life today really gave me the ability to practice, to fall and scrape my knees a bit,” he said. “It was a nurturing environment so it was okay at Howard to fall down because there would be people to pick you back up.” 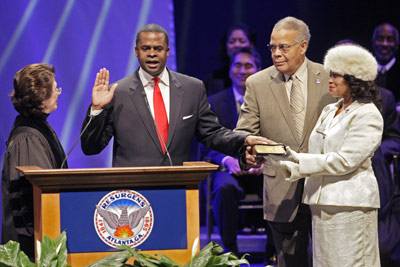 Kasim graduated from Howard in 1991 with a degree in political science and returned there to earn a law degree, graduating in 1995. He went on to serve two terms as a state representative in Georgia after first being elected in 1998. In 2001, he served as campaign manager for Shirley Franklin’s successful run for Atlanta mayor.

He was then elected to the Georgia State Senate from 2002 to 2009 before beginning his campaign for Mayor of Atlanta, which he ended up winning in a runoff election by 714 votes. The Howard University choir sang at his 2010 inauguration.

As mayor, Kasim has been acclaimed for fulfilling his campaign promise to work with the Atlanta City Council and the city’s employee unions to reform a pension program that threatened the economic future of the city. When he came into office, he faced a $48 million budget shortfall. In the past three years of balanced budgets, the city has been able to build its reserve funds from $7.4 million to more than $110 million.

He has received much national attention, recently appearing on Meet the Press for the seventh time. The New York Times’ Thomas Friedman wrote Kasim “combines a soft touch with a hard head.”

Kasim accredits many of his life and political accomplishments with the Moment he decided to attend Howard. “With the exception of my faith in God and the support in my family, Howard University has more to do with my life outcome than any other institution.”

The tension with his dad subsided. “Over time,” he said, “I think that he appreciated my independent decision and accepted it and supported it.”

When the University of Georgia’s law school called last year to ask Kasim to give the commencement speech, he called June.

“I called him and told him that I guess it had turned out alright because even though I had decided to go to Howard, the good people at the University of Georgia thought that I was worthy to come and address the graduating class of university law students,” he said. The two shared a good laugh.

Kasim proudly points to a letter from his father hangs on his office wall, one of nearly a dozen influential letters his dad wrote him through the years that address the importance of character, integrity, and leadership.

“I think that [their] influence has been the most important factor in my success and their combined influence really shaped who I am.” 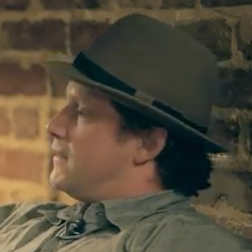 Next week in Moments: Matt Arnett

Next week in Moments: Matt Arnett, when he stumbled upon a quilt in Gee’s Bend, Alabama, that later graced a US Postal Service commemorative stamp.