Sam Massell – the “mayor” of Buckhead – made a surprise announcement at Wednesday’s annual Buckhead Coalition meeting at 103 West in Buckhead.

Massell, 92, announced he will be stepping down this year as president of the Buckhead Coalition, a role he has had since the founding of the organization in 1988. 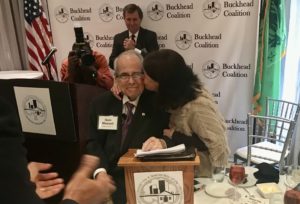 As mayor, Massell played a key role in the formation of MARTA, in changing the city elections to nonpartisan races, developing the city’s first enclosed arena (the Omni Coliseum), establishing Central City Park (now Woodruff Park), and making the bold decision to allow the then-controversial Muhammad Ali to fight in Atlanta when 50 other cities did not.

Although Massell is best known for his tenure at the Buckhead Coalition and his 22 years in elected offices, he also had careers in real estate and the travel business.

Evans said praised Massell for helping bring about the emergence of Buckhead as one of Atlanta’s most thriving commercial districts.

“Atlanta and Buckhead have experienced incredible growth and development while at the same time evolving into a much more inclusive community that anyone could have imagined in the 1960s or 70s,” Evans said. “I think it is impossible to look back over the positive changes we have experienced over this time and not have a sense of awe from the impact of Sam Massell.”

Specifically, Evans mentioned Massell’s role in helping convince the Atlanta City Council to approve the construction of Georgia 400 and his support of numerous Buckhead organizations, such as Carl Sanders Buckhead YMCA, the Atlanta International School, and the Shepherd Center.

The Buckhead Coalition also spun off the Buckhead Community Improvement District, which has generated over $59 million for numerous mobility-related improvements for the area.

As a special touch, Sam Massell announced at the end of Wednesday’s meeting that everyone would receive a Mezuzah on their way out. The Mezuzah is part of a Jewish tradition. A Mezuzah, which literally means doorpost, is put on the side of home’s entry way. The parchment scroll reads “Hear O Israel, the Lord our God, the Lord is One.”

When Joe Evans followed Massell’s announcement, he said: “I have a sense of how the Israelis must have felt when Moses stepped down.”

Not-so-affordable housing project in Buckhead gets $3.4M in tax incentives. But why?