The stars may be aligning for a vote in Atlanta in 2014 to raise money from taxpayers to hasten repairs of the city’s broken sidewalks, streets, bridges and other public infrastructure.

The bond referendum to which Mayor Kasim Reed recommitted himself Friday could be called in a year large numbers likely will turn out to vote for a U.S. senator and state governor. The timing has pros and cons.

In addition, calling the referendum in 2014 would capitalize on a public awareness campaign on pedestrian safety the state is paying PEDS to conduct in metro Atlanta. The $67,000 grant announced Dec. 12 also is to enable the pedestrian safety advocacy organization to provide technical assistance to governments.

The favorable column for a 2014 vote includes the benefits a new council and second-term mayor could reap from their efforts to repair Atlanta’s public space. Such improvements would address concerns expressed by some residents that the city was ignoring their neighborhoods, even as Atlanta negotiated over civic improvements around the future Falcons stadium.

Another item in the favorable column is that, in a previous big election, more than 85 percent of Atlanta voters approved in 2012 the extension of the 1 percent sales tax that helps pay to improve the water and sewer system. The other issue on the ballot was the presidential preference primary.

The unfavorable column includes potential political wrangling that could accompany the creation of a project list. The shine of newly elected, or reelected, members of the Atlanta City Council could be dimmed as they took the necessary steps in the political arena to ensure that their districts benefit from the first major new investment in public infrastructure since Bill Campbell was mayor in the 1990s. 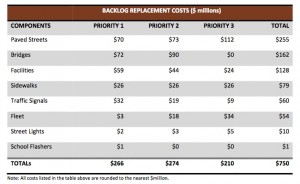 Atlanta is chasing repairs estimated by Mayor Kasim Reed at more than $900 million, which is significantly higher than the estimate in this report by the previous administration. Credit: City of Atlanta

Two significant issues yet to be addressed are:

Atlanta city officials have a good handle on the repairs that need to be made. City reports provide specific details on improvements needed to particular roads, sidewalks, streetlights, traffic signals and buildings.

Reed first floated the idea of a bond-financed infrastructure program in September 2012. At that time, Reed said the city could afford a bond issuance of $250 million. The conversation did not contemplate a tax hike to cover that payment.

Reed said the current range is based on estimates of the amount of bond payments Atlanta could afford without a tax hike.

Reed said the priority of his second term is to win approval to borrow from $150 million to $250 million to pay for improvements to the city’s public infrastructure.