Mayor Reed’s success over next four years may hinge on who did, and didn’t, vote in November election

Click on the graphic to see a larger version of the scope of victory within an electorate of 249,711 registered voters in Fulton County. Credit: David Pendered

While the scope of Reed’s victory is accurate – Reed won 84 percent of the votes – the turnout was the lowest it’s been since at least 2001. Fewer than one in five registered voters cast ballots in Fulton County, home to most of Atlanta’s voters, according to county records.

Two political observers said Tuesday the sparse turnout probably won’t hurt Reed’s ability to implement his agenda. According to political strategist Howard Franklin and political scientist Charles Bullock, a win is a win – for the mayor as well as for two new councilmembers who won citywide posts by some 2,600-plus votes each – in a city with almost 250,000 registered voters just in Fulton County.

“You think one way and one way only: 50 percent plus one,” Franklin said. “It doesn’t matter if [turnout] is off-the-chart high, or through-the-floor low. The mandate to govern comes from the group of stakeholders in any particular decision.” 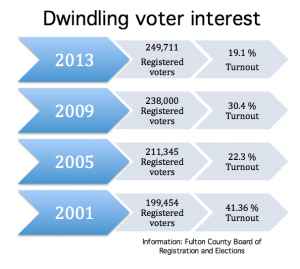 Turnout among Atlanta voters registered in Fulton County has declined for at least a decade. Credit: David Pendered

In the past, some elected officials have invoked a moral authority for their agenda that they said was derived from the size of their electoral win. Their campaign platforms became government policy in part because they swayed colleagues by saying: “The people have spoken.”

“It’s weak support,” Bullock said of the newly sworn officials. “A share of 19 percent is not a large part of the electorate.

“It also means that the 80 percent who didn’t participate don’t see anything wrong that mobilized them to vote, Bullock said. “People weren’t prone to be terribly unhappy, dissatisfied, and have an attitude of, ‘Throw the bums out.’ So they’re perfectly willing to give you a shot at it.”

Bullock and Franklin reached a their shared viewpoints from very different backgrounds. That they concur on the impact of voter turnout speaks to the evolving political optics of today’s electoral politics, and the reality that’s emerging before practitioners and academicians alike. 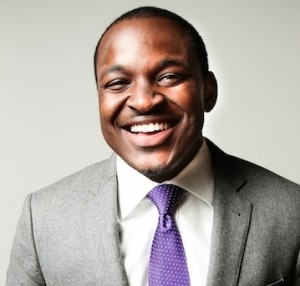 Franklin is a campaign strategist based in Atlanta. He got his start in politics when Maynard Jackson chose Franklin to run a youth voting project and, in the recent election, Franklin managed Jason Esteves’ successful bid for the Atlanta Board of Education. Franklin said he consulted on two other successful campaigns – school board member Courtney English and Atlanta City Council President Ceasar Mitchell.

Bullock is the Richard B. Russell professor of political science at the University of Georgia. In a career that spans more than 40 years, Bullock has twice been named one of Georgia Trend magazine’s “100 Most Influential Georgians.” He has consulted on statewide redistricting efforts in 13 states, with attorneys general in eight states, and with almost 100 state and local governments, according to his vita.

“There’s no obvious base to mobilize voters who could say, ‘You shouldn’t be doing that because the people will be outraged’,” Bullock said. “Someone is going to have to fan that, because it’s latent…. It does give the administration a free hand to do what it’s trying to do.” 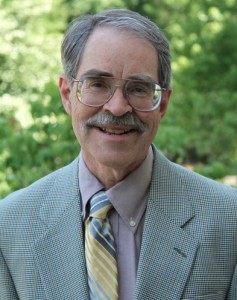 Frankin indicated that in today’s political arena, the depth of voter support for any one candidate has become less important than the issues.

“Take the [Falcons] stadium issue,” Franklin said. “A number of folks who might not otherwise be stakeholders in a multi-billion dollar sports complex became stakeholders. So we saw the decision-makers – Arthur Blank, the Falcons, the mayor, the city council – had to respect what was said.

“It comes down to who’s engaged,” Franklin said. “You have to sway the people who come out to have the conversation.”

Regardless of how Atlanta’s mayor and councilmembers got into office, the mayor probably has the advantage over the Atlanta City Council when it comes to winning policy debates, Bullock said.

“The mayor is a fulltime job, councilmembers are not,” Bullock said. “Oftentimes you find the situation, as with the General Assembly, that the fulltime mayor, or governor, generally gets his way. He has the information. He’s put the time into it. So when the issues come before the legislative body, the part-timers who haven’t had time to think much about it, say: