In mayor’s races, partisan politics seeps up through the potholes 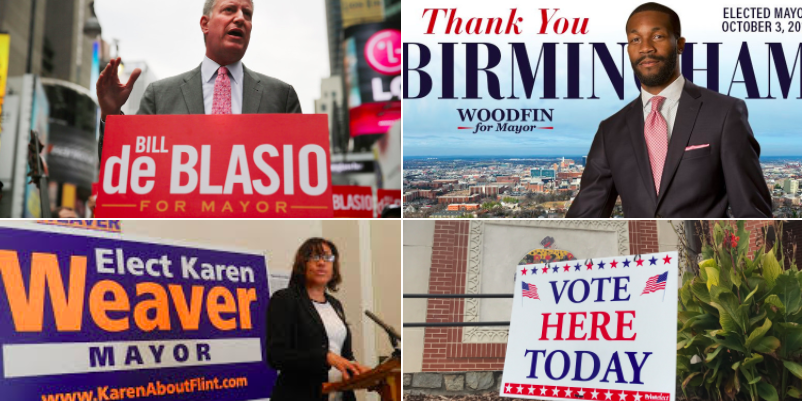 We’re not the only voters who’ve been awash in robocalls and campaign fliers. Across the country, more than 30 big cities are electing or have already elected mayors this year.

Democrats and Republicans are pitted against each other in races today in tight races in Charlotte, N.C., St. Petersburg, Fla., and Manchester, N.H. In St. Petersburg, former President Barack Obama’s endorsement has been credited with giving a critical boost to Mayor Rick Kriseman, who had trailed Republican former Mayor Rick Baker in polls before the general primary in August. Kriseman led Baker by 69 votes in the first vote, and the two face each other today in a runoff.

But a lot of the big news in mayoral politics this year is about what’s happening within and outside the parties. In El Paso and Syracuse, independent candidates have mounted challenges against Democratic incumbents, and elsewhere the Democratic old guard has been challenged within their ranks.

One of the most surprising races in the country has been the one already concluded in Birmingham, Ala., where Mayor William Bell, considered a safe incumbent, lost by nearly 20 points to Randall Woodfin, a 34-year-old former school board president who was endorsed by Sen. Bernie Sanders and has declared Southern cities to be the “frontline” of resistance to Trump administration policies. (Woodfin also benefitted from a strong Morehouse network.)

Sanders, who supports state Sen. Vincent Fort in the Atlanta race, also endorsed Chokwe Antar Lumumba, who earlier this year was elected mayor of Jackson, Miss. Lumumba, son of a former Jackson mayor who died after a few months in office, has said he wants to make Jackson “the most radical city on the planet.”

Elsewhere, ideology has taken a back seat to potholes, as it does in most mayoral contests.

“I’m not talking now about taking from the rich and giving to the poor and all that kind of crap,” said New Orleans City Councilwoman LaToya Cantrell, who faces off against former Municipal Court Judge Desiree Charbonnet later this month in the year’s most mellifluous mayoral contest.

“What I’m talking about is creating balance so everyone feels like they’re winners. We all can win. It is not a zero sum game as we have been made to believe. We will not be pitting neighborhoods against one another, we will be building up neighborhoods,” Cantrell said.

The Cantrell-Charbonnet runoff is an example of one of this year’s trends: Not just women mayoral candidates, but women versus women. This could have interesting implications in Charlotte, where incumbent Mayor Jennifer Roberts was defeated by City Councilwoman Vi Lyles in the Democratic mayoral primary in September. Lyles faces Republican Kenny Smith in what is expected to be a very close race.

In Seattle, the race between women candidates Jenny Durkan and Cary Moon was preceded by the resignation of former Mayor Ed Murray after a series of child-abuse charges.

Do we foresee an Atlanta runoff fitting into the same pattern? The polls indicate that could happen, and the New York Times has already done a story on a possible Mary Norwood-Keisha Lance Bottoms race, complete, no less, with portrait shots.

But this year’s mayoral races have also produced some surprising upsets. In a low-turnout, high-candidate universe, anything’s possible.

And any mayoral winners inclined to breath easy after their election might want to check with Karen Weaver, who was elected Mayor of Flint, Mich., promising to bring trust back to city government after the scandal involving lead in the water system.

Two years into her four-year term, Weaver will today be defending her position in a recall election in which 17 other candidates are on the ballot. There’s no runoff. Whoever gets the most votes gets to be Flint’s next mayor.

Previous Article
Atlanta Audubon promotes habitats for birds, people in its updated mission
Next Article
Election day in Atlanta: where to go, what’s on the ballot