Sir James Paul McCartney, the most successful songwriter according to the Guinness World Records, came to Piedmont Park for a fundraiser dedicated to expanding the park by 40 percent.

He is known mainly for his songs written with The Beatles rather than those composed through his side projects and solo work. He wrote songs such as “Yesterday,” the most covered song in history, deemed by some to be the greatest song of the 20th century. This song is listed as composed by McCartney-Lennon, although it was written solely by the former. 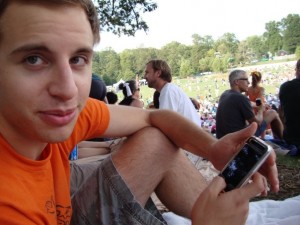 Another song he performed was Helter Skelter, which also had a wide range of influence. For instance, Charles Manson believed in a future apocalyptic war called Helter Skelter caused by the tensions between white and black people. This song also is considered by musical historians to be integral to the development of the Heavy Metal genre. When he performed this song on stage, a video of a roller coaster ride was played behind him, beginning with the coaster ascending by chain up a long incline, which was perfect for the building period of the song.

He also performed one of my personal favorites, “Blackbird.” Probably the most notable song, judging by the reaction of the audience, was “Hey Jude.” He took advantage of all eight minutes and got the audience involved by letting them sing “Na na na, na-na na na, na-na na, hey Jude.”

After the eight-song encore, which ended with the suitable “Sgt. Peppers Lonely Hearts Club Band” fading into “The End,” a crowd of people, ranging from drunk, elderly men to small children, rushed to leave through the two exits. During this time, somebody decided to repeat their “Hey Jude” lines, which resulted in a mass of people singing theirs in sync. Everyone was excited to have seen the only original Beatle still alive, the most famous of the two living legends of the most influential band in history.

Before we touch more on the music, we have to start from the beginning half of the concert. It started at 4 p.m., when the doors of Piedmont Park opened to the public. Half the people came at this time and the other half slowly flowed in until the start of the concert to complete all 40,000 attendees.

People who had been camping since the night before got to choose their seat first, probably a spot in the front row next to the blasting speakers and close enough to see Paul McCartney’s sweat.

Being less adventurous, I was informed of a nice spot with a tree on top of a hill, a place free from heads obstructing my view and with the bonus of shade from the intense sun. To pass the time a friend, some family members and I learned and played Spades.

Before the concert started we found a nice vegan restaurant where we got a well-priced plate of curry and barbeque tofu.

During the concert, the shady spot we occupied was useful when it rained for a good half hour; the only downside was after the storm had passed, the leaves carried water that continued to spill on us. A brave few just took on the rain, blankletless, while the wind made everyone contemplate hypothermia. Body heat and music provided an appropriate sanctuary to the cold and added just another element to the concert.

The start of the concert was phenomenal. Paul McCartney started with the Beatles’ song “Drive My Car,” and everyone became immediately engrossed in the concert, which lasted two-and-a-half hours.

I have to say that his solo work and side projects, which lasted roughly half of the concert, was a downside, but only because The Beatles songs were better known and better all-around in my opinion. Perhaps “Live and Let Die” was the exception, but every Beatles’ song he performed provided more of a reaction than that song.

No song was bad, however, because even the aged musician still had a terrific voice and along with his band played each song almost flawlessly. His band was made of younger talented musicians that not much is known. I guess if you play with a legend you are automatically cast out of the limelight.

Overall, no one can doubt Paul McCartney’s energetic performance at age 67, especially considering he performed as long as he did. He reminded me of the highly energetic and boyish John McCain.

At the end of the concert he strangely lifted his bass and guitar up repeatedly, but with the fireworks and the experienced, excited musician made this a night to remember.

David Luse is the son of Maria Saporta who has attended hundreds of concerts. He is currently attending Georgia College & State University as an Enligsh creative writing major. The Beatles is one of his favorite bands.

Previous Article
Column: World must choose ‘fast green’ or ‘slow brown’
Next Article
Not quite “shovel ready” projects also need to be considered