The headline on a climate report from Yale Climate Connections says a lot: “What’s ‘normal’ in a changing climate?” 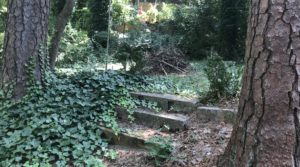 The invasive English ivy spreads swiftly in the warm, moist climate that has begun extending from daytime into overnight hours in Atlanta, according to a NOAA report. Credit: David Pendered

The story looks at upcoming revisions to federal database that’s used to determine if temperatures are warmer than “normal” and to make other weather comparisons. TV meteorologists use this database to say if a day is to be hotter than average.

The wrinkle is that the past decade has been warmer and wetter than the one it’s replacing, according to YCC’s report, Updated yardstick begs question: What’s ‘normal’ in a changing climate? The report observes: 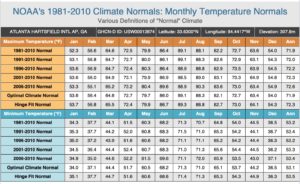 NOAA’s climate report from a station at Atlanta’s airport shows the changes in daytime and overnight temperatures that occurred in the recent past. Credit: ncdc.noaa.gov

UGA’s Pam Knox reviewed Henson’s material and generally concurs with his analysis, according to her Feb. 3 report on the website, Climate and Agriculture in the Southeast, which is sponsored by the UGA Cooperative Extension. Knox directs the UGA Weather Network and serves as agricultural climatologist. Knox observed:

Knox contributed to Henson’s research and he quotes a few lines from an email: 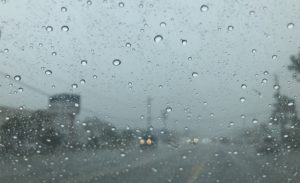 Blinding rain is a sign of the wetter climate in Georgia that a UGA report says has become common over the past 30 years. Credit: David Pendered

The temperature values Knox cites are borne out in a report from NOAA on supplemental temperature normals. The report can be organized by state and by the field station within a state that provides the weather data. The report from Atlanta’s airport shows the following highs and lows for two selected months.

Henson explores how the change in reporting periods factors into the discussion over climate changes in a section that begins:

Henson offers this observation in his concluding remarks: