Memorial Drive was buzzing a decade ago as homebuyers picked up units located close to Downtown Atlanta and Midtown, but at prices that reflected the street’s gritty urban texture. 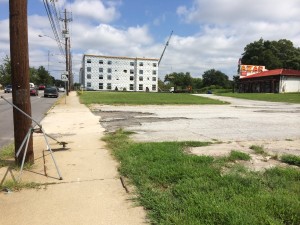 The Leopard condo building is rising on the former site of the dive-bar Lenny’s. Azar’s liquor store is still open at its popular location on Memorial Drive. Credit: David Pendered

These days, humming may be a better word to describe the pace of development. Another difference? Now there’s a bona fide effort to plan for the future of the corridor along a 5.5-mile stretch from I-75/85 to Candler Road.

A group of Georgia Tech graduate students, working under the guidance of Mike Dobbins, a Tech professor of practice, are devising a framework plan for the Memorial Drive corridor. Consider just this one fact the students already have unearthed:

In addition to the crashes, students observed that there’s a surprisingly high amount of pedestrian traffic along Memorial Drive, and not all the walkers stay in the crosswalks. Young and old alike walk to destinations including several schools, a library, two YMCA centers, coffee cafes and other community gathering points. 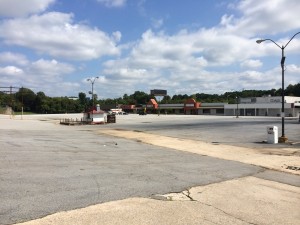 This shopping center on Memorial Drive, home to a Family Dollar store, has been likened to a Ukrainian civil war site by the chairman of the area’s neighborhood planning unit. Credit: David Pendered

“It’s amazing that middle school children are crossing Memorial Drive,” Dobbins said. “Safety, travel safety for all modes, is going to be a unifying theme of the study. Safety, and striping and lighting and crosswalks, and trees.”

Another goal of the framework plan is the creation of a unified vision for an urban corridor that transitions from an industrial nature closer to the state Capitol to houses and mom-and-pop shops as the road makes a straight line toward Decatur and Stone Mountain.

A handful of Tech students presented results of their first three weeks of work at a meeting late Monday afternoon at Drew Charter School’s Senior Academy. The finished product is due by the end of the year.

An audience of about 50 residents stayed for the entire 90-minute presentation.

The fact that so many stayed for so long speaks to the caliber of information the students presented, and to recognition of Dobbins’ touch. Aspects of a framework plan Dobbins oversaw last year, for Northside Drive, were written into development plans adopted by the city for the Falcons stadium that’s now under construction. 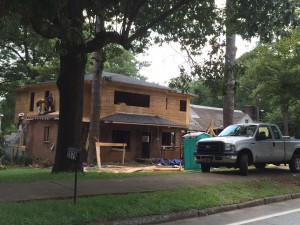 Home construction appears to be occurring at a steady pace in the Memorial Drive corridor. This unit is located a short distance from Memorial Drive, on Hosea Williams Drive. Credit: David Pendered

Many in the audience have been working on Memorial Drive’s development for many years. There’s not much that some haven’t heard.

“I would not show up for most meetings like this,” said Ed Gilgor, who’s chaired NPU W since January 2003.

“But I think this is an excellent idea,” Gilgor said. “Memorial Drive is an underutilized resource with a lot of potential. It’s been left to decay. Parts have done very well and have been developed in a very nice way. Near the Family Dollar, it looks like you could be in the Ukrainian civil war.

“Memorial Drive is on the outskirts of everyone’s district, so it gets ignored,” Gilgor said, referring to elected officials.

There was no sign Monday that elected officials ignored the event.

Atlanta Councilmember Natalyn Archbong is leading the city’s support for the Tech study and stayed through the meeting. Councilwoman Carla Smith stayed to the designated end time, and as the conversation continued she left to attend another civic meeting. DeKalb County Commissioner Larry Johnson stayed through the presentation. 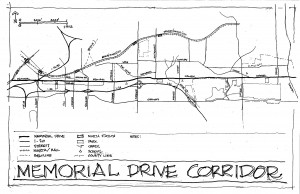 This map shows the stretch of Memorial Drive for which Georgia Tech students are devising a framework plan to help guide development. Credit: Mike Dobbins 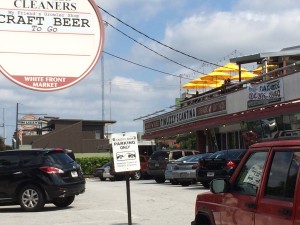 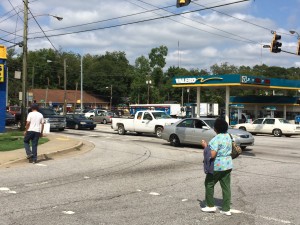 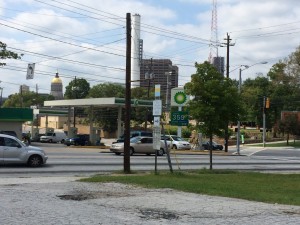 With the state Capitol in the background, Memorial Drive continues to hum as a commercial and residential corridor connecting Atlanta with Decatur and Stone Mountain. Further east, the road is named Cynthia McKinney Parkway, to honor the former congresswoman. Credit: David Pendered