The summer smash refrain, “Lowkey F­2020,” does as good a job as any of the surveys in summing up the nation’s mental and emotional health. One balm that still works, say those who promote it, is spending time outdoors. 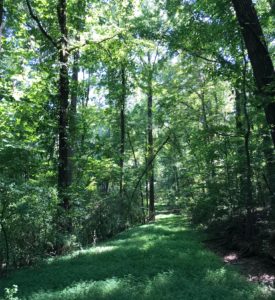 Mental outlooks can be improved by being outdoors and walking along trails, such as this one at the Lake Charlotte property, near Moreland Avenue, purchased for future greenspace by the City of Atlanta. Credit: Kelly Jordan

F2020 became the summer sensation after starting on TikTok and surviving censorship efforts through the strength of a reported 13 million views within a few weeks. The following is one of many lyrics in a video (warning: adult content) by the three-woman group, Avenue Beat, that evidently sums up the year for millions of viewers:

Against this tableau, a recommendation to seek solace in the great outdoors may seem like a bromide, as are suggestions to eat plenty of fresh vegetables and get plenty of sleep.

With the season of winter holidays arrived, these clichés may be worth consideration.

This year the season brings the usual reflections on family and friends who have died of all causes, plus thoughts of traditional gatherings that won’t gather and of the spike in illness among some who did gather to celebrate Thanksgiving.

Two women who work in metro Atlanta to create pleasant spaces in wooded retreats, places that offer sanctuary for respite, speak highly of the value of simply spending time outdoors. 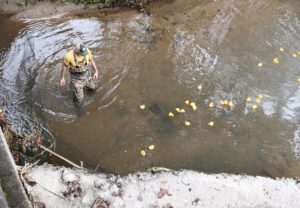 The annual duck race sponsored in October by the South Fork Conservancy provided spectators and participants an opportunity to relax outside with others in a socially distant manner. Credit: Don Walter

Gardening is another activity that Harclerode mentioned as a way to connect with nature. Gardens can be as simple as a plant in a container, or as elaborate as a full-scale garden.

“Cultivating plants and crops is an activity that is affordable, easy to do, and can be done in a backyard or at the preserve,” Harclerode said. “There is research that shows the mental health benefits of gardening.” 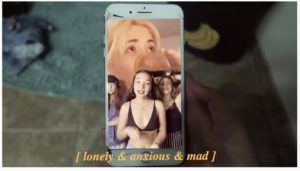 The lyric video posted this summer by the band Avenue Beat attracted millions of views for its message about the COVID-19 pandemic. Credit: youtube.com

Sears said the value of spending time outdoors is heightened in this era of pandemic. Along with the sense of rejuvenation that can come with being outside, especially in a wooded retreat, is the opportunity to talk and share experiences with others in a safe and socially distant setting.

“The long lasting effects of meeting neighbors outside is you see each other in a more rounded way,” Sears said. “You can share common experiences over something you may not have seen before, like an otter in a creek. You see the world, and each other, differently.”

All the better if the gathering can be around an event such as the annual duck race, which the South Fork Conservancy held in October in conjunction with the Emory Open Streets celebration.

“You’re cheering for something that is utterly charming,” Sears said. “It’s not going to make a lifetime difference about who wins the duck race. It’s a plastic duck.” 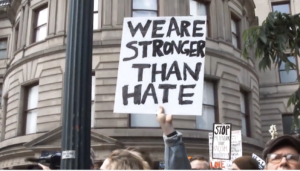 Arlo Guthrie spreads a message of hope in the face of despair in his video rendition of Stephen Foster’s classic ‘Hard Times Come Again No More.’ Credit: youtube.com

Another song of the summer relates the idea of maintaining a perspective that is promoted by being outside. Arlo Guthrie released a video of a performance of Stephen Foster’s classic, Hard Times Come Again No More, with Jim Wilson and Vanessa Bryan.

A closing stanza reminds of the need for perspective during a time the bad news seems unrelenting:

A news report Sunday observed this year’s death toll was abnormally high and COVID-19 wasn’t the only cause, according to a Sunday story in nytimes.com. Potential causes include disruptions caused by the pandemic in getting routine medical care; loss of income to buy medicine to treat chronic illness; and social isolation and getting help for emergencies, according to the story.

Georgia hit the national scale on above-normal death rates in three areas, according to the Times’ analysis of deaths recorded by the Centers for Disease Control and Prevention. The following increases in deaths in Georgia were reported in the period from March 15 to Nov. 14: