Metro Atlanta continues to bob along in the debris left by the Great Recession, according to two recent reports. 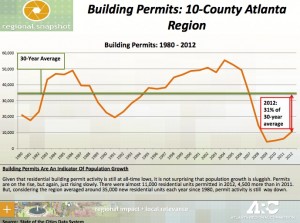 The Atlanta Regional Commission estimates that building permits are less than a third their 30-year average. Credit: ARC

The Atlanta Regional Commission used the word “muted” to describe the growth rate of 10-county metro Atlanta during the past year. In addition, the number of residential building permits issued was less than a third of their 30-year average.

The Atlanta Federal Reserve Bank reports that growth rates and expectations are moderating in home construction, mortgage refinancing and consumer spending. Overall, the broader economy of the Deep South continues to expand modestly.

The portrait sketched by the data provides context to the appearances by Gov. Nathan Deal and Atlanta Mayor Kasim Reed to trumpet the arrival of new employers or other economic advances.

Just last week, the governor and mayor gathered to welcome PulteGroup to the site of its future headquarters in Capital City Plaza, in Buckhead. The company expects to hire about 160 individuals in the Atlanta area and relocate about the same number from its current office near Detroit.

There have been times when an arriving corporation did not receive such an embrace from Georgia’s governor and the mayor of the capital city. But these are different times.

Metro Atlanta is growing at a rate not seen since the 1970s, according to the Regional Snapshot of 2013 Population Estimates. The ARC’s charts don’t provide information for periods prior to 1970.

Gwinnett County, once the landing pad for residents new to the region, has seen its growth rate fall by more than half. The county now is home to an estimated 832,200.

The figures in ARC report remain unofficial until Aug. 28.

Residential building permits remain at an all-time low, according to ARC’s report.

Click on the chart to see a larger version of population estimates by county and for the city of Atlanta. Credit: ARC

These figures are the reason the local construction industry is sometimes portrayed as being back in business.

However, residential construction is hard to be described as anything but anemic compared to the average issuance of 35,000 building permits a year during the past 30 years.

Doug Hooker, ARC’s executive director, maintained the focus of his message on the opportunity presented by the drop in metro Atlanta’s rate of growth.

“While our latest population estimates reflect slower growth than we became accustomed to in the ‘90s and 2000s, metro Atlanta is still a place that attracts many people,” Hooker said in a statement. “Our local jurisdictions have had a few years to catch their collective breaths and are preparing for faster growth that will come as the housing market and the economy continue to bounce back.”

ARC’s report noted that Atlanta was the sixth-fastest-growing metro region in the U.S. from 2012 to 2013. In this category, metro Atlanta is defined as a 28-county region.