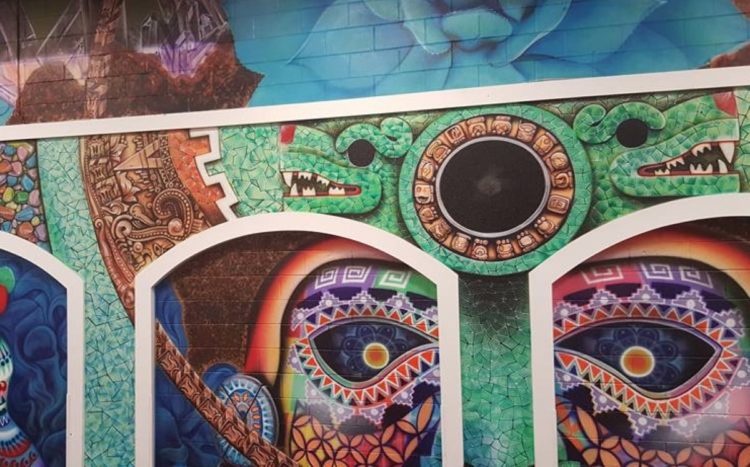 His story would make any parent proud: The child prodigy earns a degree in fine arts while on a scholarship to Georgia State University, and goes on to open his own studio along Buford Highway. The problem is, he’s in the country illegally and is subject to deportation. 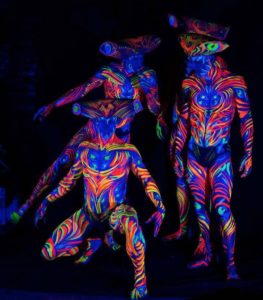 Roberto Hernandez and about 24,000 other Georgia residents are to face deportation starting March 8, 2018. Just over half of them reside and work in metro Atlanta, according to a joint report by the University of Southern California’s Center for the Study of Immigrant Integration and the Center for American Progress

By 2020, all 800,000 individuals nationwide who are in a similar legal status are to lose their legal ability to attend school and work. They face deportation to their country of origin.

Hernandez and the others were brought into the United States by their parents illegally, before they were 16 years old. The Obama administration provided them a shield in 2012 through the Deferred Action for Childhood Arrivals program, and DACA’s recipients were dubbed DREAMers.

President Trump is winding down DACA and set the March 2018 deadline. Trump joined with U.S. Attorney General Jeff Sessions in calling for Congress to address the immigration issue, which was a key issue in Trump’s 2016 campaign.

This week, the legislative battle over immigration is reaching a zenith in Congress.

Congress must pass a spending bill before the end of the year, or risk a possible government shutdown and less funding for defense. Given some GOP infighting over military spending, the Republicans need support from Democrats to pass the bill. In exchange for that support, Democrats are calling for a deal to continue protections for the young adults dubbed DREAMers, according to a Dec. 4 report in beta.latimes.com.

Attention to the immigration issue has waned as the Washington media corps has focused most of its attention on the Republican tax plan. Plus, they’ve delivered a scattering of stories about another program that was cut – the Children’s Health Insurance Program. CHIP, called Peachcare in Georgia, helps working families who earn too much to qualify for Medicaid. States were left flat-footed when CHIP funding expired Oct. 1.

DACA recipients in the five congressional districts that serve metro Atlanta added a total of $554.6 million in annual economic impact, in 2013 dollars rounded to the nearest $100,000. Credit: USC and CAP

The U.S. Chamber of Commerce is lobbying for an outcome that will allow the DREAMers to remain in the country. Deporting them would be, “contrary to fundamental American principles and the best interests of our country,” chamber President and CEO Thomas Donohue wrote in a piece published Oct. 2.

Multiple think tanks have released reports showing the DREAMers’ economic impact. One of them provided a breakdown by congressional districts.

Metro Atlanta benefited from $554.6 million in annual economic impact, in 2013 dollars, by an estimated 12,400 DACA recipients. The report was produced by USC and CAP.

Georgia’s two Republican senators have staked out their positions.

Sen. David Perdue has co-sponsored a bill that would prioritize immigrants for entry to the U.S. based on job skills. It would cut legal immigration levels by about half by 2027. Perdue and the lead sponsor, Arkansas Republican Tom Cotton, a hardliner on immigration, say the bill would improve the U.S. economy. Trump has said he supports the legislation. 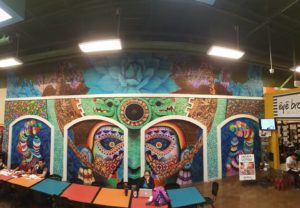 Artist Roberto Hernandez serves as creative director of the program to paint murals at Plaza Fiesta, a destination on Buford Highway. Credit: facebook.com/robertosartwork

Sen. Johnny Isakson has not co-signed any bills on immigration and contends in a statement on his website:

Meanwhile, the DREAMers await their fate.

Hernandez, the artist and GSU grad, was 12 years old when his family migrated from Mexico. The ransom paid to free his mother from kidnappers had wiped out the family’s resources. Hernandez’ mother decided to seek refuge from the chaos by moving to the United States, according to a biographical statement posted on his page at rawartists.org.

Hernandez made the difficult adjustment and has excelled in his chosen field. Through his company, Roberto’s Artwork, he’s overseeing a large public art project – all the mural work being done at Plaza Fiesta, located on the eastern edge of Brookhaven. The work builds on his involvement in this year’s Living Walls event along Buford Highway, coordinated with We Love BuHi, a social enterprise that aims to uplift the corridor.

Hernandez’s work include body painting, at $75 an hour, canvas painting, studio and set design, according to his profile on thumbtack.com, where he says: 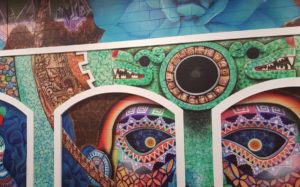