Metro Atlanta leaders on the 15th annual LINK trip to Seattle from May 4 to May 7 have a better understanding of what it will take to pass a regional sales transportation sales tax in 2012.

The Atlanta delegation heard from leaders in Greater Seattle about their failed attempts, and eventually successful attempt, to pass a transportation sales tax.

• It’s critically important to have a grass-roots effort to listen to voters and engage them on the vision for a regional transportation system; and

• Having a regional transit organization helped give voters confidence that the vision would be implemented.

In metro Seattle, a referendum that split revenues between roads and transit failed. But a transit-only referendum a year later passed overwhelmingly.

The timing of that successful referendum was the presidential election of November; 2008 brought out a large turnout of voters, many who were younger and more open to taxing themselves for transit.

The Atlanta LINK delegation included many of the decision-makers and leaders who have been wrestling for years about the need for new funding for transportation in the region.

There also were a number of legislative leaders present on the trip who said they had gained greater insights on issues facing the Atlanta region.

“It did broaden my horizon,” said Jan Jones, president pro tem of the Georgia House of Representatives. “The people on the trip helped me visualize the Atlanta region in a way that I had not looked at in the past.”

About the regional transportation sales tax, Jones said: “The consequences are real. I learned that it’s not about a particular project list. It’s about an overall vision for the region.” 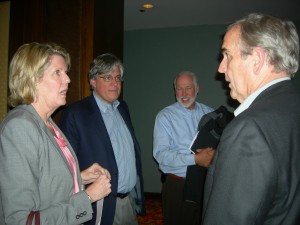 After the closing session of the LINK trip, which focused on what it will take to pass the regional transportation sales tax, several leaders huddle in an ad-hoc strategy session. Left to right: Jan Jones, speaker Pro Tem for the Georgia House of Representatives; Tad Leithead, chairman of the Atlanta Regional Commission; Bucky Johnson, Mayor of Norcross who is chairman of the Regional Transportation Roundtable; and Sam Williams, president of the Metro Atlanta Chamber (Photos by Maria Saporta)

Tad Leithead, chairman of the Atlanta Regional Commission (which organizes the LINK trip), said most of the key players were present in Seattle and were focused on what the community needs to do for a successful result in 2012.

During the Seattle wrap-up session, the conversation was pointed yet respectful.

“Right now, we are too much about having a conversation with ourselves,” Scott said, adding that transit governance also was key. “Clearly we have to get this governance piece figured out about who is going to deliver it.”

Roswell Mayor Jere Wood spoke for most of the Fulton and DeKalb mayors, who are concerned about having a second penny in addition to the 1 cent MARTA sales tax.

“It is critical that we address transportation governance,” Wood said. “We’ve got mayors of Fulton County and DeKalb County that are not on board. We can’t afford not to address this governance issue.”

Throughout the trip, the mayors could be seen caucusing, trying to figure out what governance structure would be best for the region. 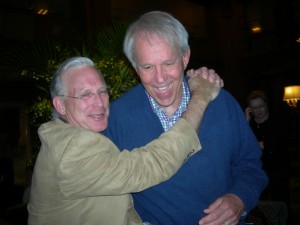 LINK provides some light moments. Roswell Mayor Jere Wood jokes around with Decatur Mayor Bill Floyd. Mayors in Fulton and DeKalb are wrestling with the equity issues of the regional transportation sales tax proposal because their residents already are paying a one-cent MARTA sales tax

At the end of the trip, Cobb County Chairman Tim Lee said: “I also think the governance issue getting straightened out as soon as possible is key.”

Other leaders also held ad-hoc meetings. Jones told Leithead she would be open to considering new legislation on either the governance issue or changing the date of the referendum.

One issue discussed was whether metro Atlanta should establish a new regional transit agency or restructure an existing agency or consolidate the region’s different transit operations under one umbrella.

“This trip has opened up the eyes of many regional Atlanta and state political leaders about the attraction that transit holds for the voter and the way it fits into a regional transportation system,” said Ray Christman, executive director of the Livable Communities Coalition.

David Connell, president of the Cobb Chamber of Commerce, heard that same message.

“The one subject that moved the needle was the recognition that transit is important,” Connell said, adding that passing the referendum would be an uphill battle. “It is going to be difficult to reach out to citizens throughout the region to get it passed.”

Clayton County Commission Chairman Eldrin Bell also said it would be a “challenging proposition” to get it passed.

“It’s critically important that we don’t have a gerrymandered list [of transportation projects],” Bell said. “We don’t want projects on the list that are not regional.”

Renay Blumenthal, senior vice president of public policy for the Metro Atlanta Chamber, said transportation referendums in many other cities would fail before they passed.

“Let’s learn their lessons so we can have success the first time,” she said.
The LINK trip did show how passionately people felt about the Atlanta region and the importance to implement plans for the future.

“It’s very difficult to explain the energy that was in the room during the wrap-up session,” Leithead said. “I do think continued energy around these issues is a very good sign.”

Brian Leary, president of Atlanta BeltLine Inc., agreed. “We had a common single goal to get this referendum passed,” Leary said. “I really felt there was an energy that was palpable this year, and energy that I haven’t felt in the past.”