Editor’s Note: This story retracts a comment in the original story that was attributed to Jules Toraya, Zero Waste manager with the city of Atlanta, and adds new comments from Toraya.

Metro Atlanta’s traffic congestion may be a mess, but the region is at the forefront of changing the vehicles in which people travel.

Atlanta ranks No. 2 in the nation for electric car sales. Georgia Tech engineers are devising self-driving cars. Uber – the rides-on-demand service that fended off the state Legislature this year – on Friday announced it has raised $1.2 billion from investors who now value the four-year-old company at $18.2 billion.

Taken together, these developments point to a vastly different future in terms of how people metro Atlantans may commute in the future. Although the vehicles won’t be flying cars like in the Jetsons cartoon, the trajectory seems toward a very different mix of vehicles and drivers on roadways.

The Wall Street Journal broke the story this week, evidently by picking up a report released May 15 by the IHS Automotive trade group. Because IHS priced the report at $4,400, this report is sourced from the story on wsj.com. 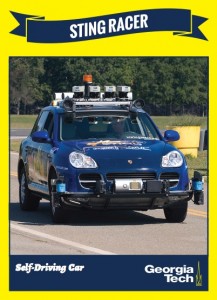 Until cars can fly, self-driving vehicles appear to be the next-bet option. This model came from a lab at Georgia Tech. Credit: cc.gatech.edu

“I think it’s because the technology and understanding and how it fits into the lifestyle of people is really starting to resonate,” Jules Toraya, the Zero Waste manager with the city of Atlanta, was quoted in the wsj.com article.

Toraya sent an email Monday to SaportaReport to clarify his comments in the wsj.com story. Toraya also elaborated with the following thoughts about tax credits for electric vehicles:

In terms of self-driving cars, Georgia Tech is pioneering vehicles that can navigate city streets. There’s not been much discussion on websites, but a flier for an event stated the work is guided by Henrik Christensen, the KUKA chair of robotics; is built from a Porsche Cayenne; thinks with an, “entire 8-blade server rack in its trunk and sports aviation-grade inertial measurement unit (IMU) sensors.”

The fun fact is that the vehicle, “loves to shuttle passengers around town, but can’t until it’s legal in Georgia for a car to drive itself on city streets.”

Meanwhile, Google grabbed headlines last week by announcing it intends to have about 100 prototypes on the road later this summer. They’ll be test-driven with manual controls with the goal of having a small pilot program on the road in California within a few years, according to Google’s blog:

“We’re going to learn a lot from this experience, and if the technology develops as we hope, we’ll work with partners to bring this technology into the world safely,” Google said in the blog.

Uber is one potential partner for Google’s self-driving vehicles, according to blog chatter.

Such an innovation would ease regulatory pressures of the type Georgia lawmakers attempted this year. House Bill 907 did not pass. It would have required ride-share drivers, the jargon for Uber drivers, to register with the state and pay an annual license fee of $100. The service would have to comply with local taxicab ordinances.

Uber defeated the legislative effort with help from Lewis Massey, Georgia’s former secretary of state who’s now a lobbyist with clients including Tesla Motors, an electric vehicle company with a showroom in Marietta.

On Friday, Uber announced it had raised $1.2 billion in investments, with an additional $200 million to be announced soon. The first round of investment valued the company at $18.2 billion, according to reuters.com.

The company’s growth stats astound. According to Uber’s statement, the company:

Previous Article
Norman Wolfe, co-founder of Cohn & Wolfe PR agency, has passed away
Next Article
MARTA looks to invite developers to build on top of its urban rail stations