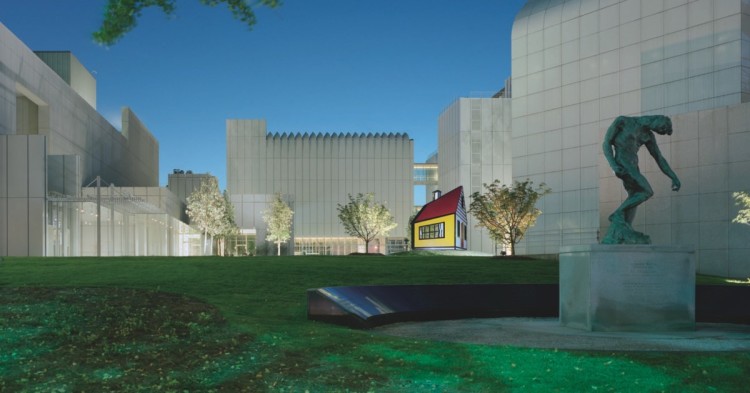 A new report that shows metro Atlanta ranks fourth in the country in terms of charitable giving provides an interesting insight into Clayton County. 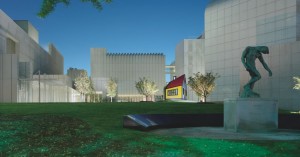 Clayton County leads the five-county metro area in the proportion of median adjusted gross income donated to charities, according to a report released by U.S. Trust, Bank of America Private Wealth Management.

The giving ratio in Clayton County was 6.97 percent – the highest rate in the region – even though the median adjusted gross income in Clayton was the lowest of the five core counties (Clayton, Cobb, DeKalb, Fulton, and Gwinnett counties).

Even at that rate, Clayton’s total contributions were lowest, by far, of the five counties. That’s because incomes in Clayton are significantly lower than those in the rest of the metro area.

For example, DeKalb County led the region in total contributions, though the giving rate was 40 percent lower than the rate in Clayton. DeKalb’s median adjusted gross income is $22,364 higher than that in Clayton County, according to the report.

Just what it says isn’t evident in the data now available. 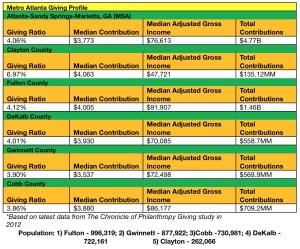 “Clearly, the wealthiest Americans give a very significant percentage, and certainly a very significant dollar amount, to charitable beneficiaries,” Coker said. “It may just be anecdotal here that Clayton, being one of the lower median incomes, has the highest giving level. I don’t know that we can extend that to make a blanket statement across the metro area or country.

“We’d have to see what some of the data that feeds into this really looks like and see how that breaks down,” Coker said. “Is it Clayton State University [receiving the gifts]? Is it religious organizations? Is it small non-profits?”

Incidentally, Clayton residents voted in 2014 to raise the county’s sales tax by 1 percent in order to bring transit service into the county, in the form MARTA buses immediately and, eventually, trains.

The bank tracks the data to inform financial strategies it provides to clients, Coker said. This is the reason the bank hasn’t sliced and diced the figures for metro Atlanta. A micro level of regional data isn’t required to develop a financial strategy for clients. The data does enable Coker to place metro Atlanta in the context of the national trends of charitable giving.

“At first blush, Atlantans, as a whole, are charitably inclined,” Coker said. “Atlanta compares favorably to the national profile.”

This stems from the wide array of top quality organizations that individuals want to support, Coker said. The region’s colleges and universities are attractive beneficiaries, as are organizations including the Woodruff Arts Center and Community Foundation for Greater Atlanta.

“We’re in a place where it’s easy to give,” Coker said. 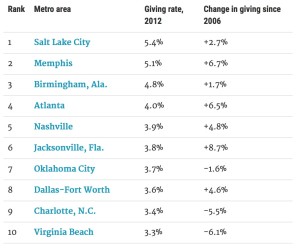 Atlanta ranks fourth nationally in charitable giving, a practice that is lead by regions in the south. Credit: philanthropy.com

Ranked fourth, Atlanta trails No. 1 Salt Lake City; No. 2 Memphis; and No. 3 Birmingham.

In terms of an increase in the giving rate since 2006, which was the start of the Great Recession, Atlanta ranks third on the Top Ten list – trailing Jacksonville in a Memphis in this category.

“Another thing to point out is that as the economy has improved, consumers are feeling more and more confident,” Coker said. “A more confident consumer, in general, is going to lead to higher charitable giving levels.”

Congress took a step in December that should improve the climate for charitable giving, Coker said. The compromise federal budget provides a permanent provision that allows for mandatory distributions from Individual Retirement Accounts to be donated straight from the account to a charity. The step eliminates tax consequences for the donor.

“It means that individuals can make those charitable contributions earlier in the year, rather than waiting to the end of the year,” Coker said. “Congress would make a ruling for the current tax year, but we had to wait until they ruled in December to know if people could make a gift from the IRA. That nice to have settled on a more permanent basis, although Congress still can change it in the future.”

The U.S. Trust Study of High Net Worth Philanthropy is produced by the bank in partnership with the Lilly Family School of Philanthropy at Indiana University.

Results are based, in part, on the latest data from The Chronicle of Philanthropy Giving study, in 2012.

Coker said the bank’s clients have high wealth, of $3 million and up. The amounts are typically high enough to survive the individuals. Thus, the need for financial planning.

“They think a lot about it for their children and charitable giving,” Coker said. “We advise clients all the time on the best way to accomplish their strategies – charitable advisor funds, private foundation, a multitude of different things to take advantage of the tax laws to make giving as successful as it can be.”

Previous Article
Football, politics and the zero-sum game
Next Article
City of Atlanta pays APS $9 million as they move towards resolving BeltLine dispute