Metro Atlanta roads: How to make do with a transportation system that’s (mostly) already on the ground

State and regional transportation planners are taking the steps they think are within reach in order to relieve traffic congestion in metro Atlanta. GRTA’s board took its first step Wednesday. 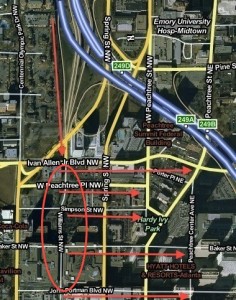 One way to reduce traffic congestion on the southbound Downtown Connector would be to change driver behavior on Williams Street. Instead of allowing drivers who exited onto Williams Street to turn left onto Ivan Allen Boulevard, which is the first left turn after the highway, drivers could be directed into the area marked by the oval and allowed to turn left on one of those intersecting streets. This routing would result in eastbound traffic backing up on Williams Street, instead of onto the highway, according to an example provided by a GDOT planner. Credit: David Pendered, Mapquest

The solution won’t be a magic bullet, no more so than if voters in 2012 had approved the construction program envisioned for the proposed 1 percent transportation sales tax. Transit was not part of Wednesday’s conversation.

Gov. Nathan Deal’s touch is evident in the new approach. Deal said after the sales tax referendum that the state would focus on affordable transportation solutions, or, in the words of the resolution approved by GRTA’s board: Georgia will, “improve the movement of people and goods across and within the state [in order to] expand Georgia’s role as a major logistic hub for global commerce.”

Two planning efforts are unfolding simultaneously. Both target only roadways, and both appear intended to create a bare-bones set of transportation construction projects.

“We’re looking at … what we can do, what we can expect, and what we can afford – because that’s what we’re getting into,” state transportation planner Kyle Mote told the GRTA board.

One current effort – the one approved by GRTA’s board – calls on GRTA, ARC, and the state Department of Transportation to devise transportation plans that “direct limited resources to the most impactful projects” that will be identified in updates to the region’s long-range transportation plan, according to the adopted resolution.

A similar resolution is due for adoption Thursday by the ARC’s transportation planning committee. If approved, the ARC board could consider it as early as April 24.

The second effort is a double-pronged approach to managing the interstate highway system in metro Atlanta.

One prong involves the wiser use of managed lanes to be installed in the future, and only outside I-285. These lanes most likely will be tolled. The second prong is better management of existing roadways.

Typically, traffic exiting at Williams Street backs onto the highway because of the clog of cars waiting to turn left from Williams Street onto Ivan Allen Boulevard. Those vehicles could be moved off the highway if the left-turn lane were relocated from Ivan Allen Boulevard to an intersection a block or more farther south, away from the connector.

This solution would move most of the clog of cars, if not all of it, from the highway to Williams Street. The result would be, essentially, the formation of an extra lane for travel on the Downtown Connector.