A renowned policy advisor who specializes on a topic central to Atlanta’s self-identity – urban competitiveness – will be in Atlanta Friday at to present a program that could be a game-changer for the region’s economy. 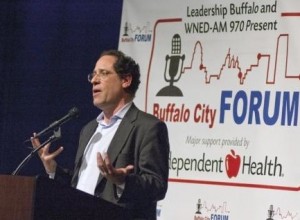 “Look, I have engaged Atlanta in the past, and Atlanta has enormous advantages: It is a city that has shown it can reinvent itself for the next thing,” said Bruce Katz, of the Brookings Institute. “But this moment is different from other inflection points. This one of those moments in time that really is different.”

Katz intends to identify the region’s phenomenal evolution over the past decade, and address ways the region can focus, and benefit from, that transformation. Katz is the keynote speaker at the ARC’s State of the Region Breakfast, Friday at 7 a.m. at the Georgia World Congress Center.

“I’ll walk through the numbers on the low-carbon economy, exports, manufacturing, demographic change, skills of immigrants, human capital, education attainment levels in general,” Katz said. “It’s really going to be a focus on those sectors, and those contributing elements, that drive your economy.”

An example of the extent of social change in the region that Katz will discuss is unfolding every day in Gwinnett County. No other county in metro Atlanta has experienced the depth of cultural changes of Gwinnett during the past decade. Gwinnett no longer is home to a majority of white, affluent, well-educated residents; Gwinnett today is much more cosmopolitan.

Here’s an example of Gwinnett “By the Numbers” that transfixed listeners at the Atlanta Regional Housing Forum when presented last month by Lejla Slowinski, executive director of the Lawrenceville Housing Authority:

In thinking about how the region could benefit from this emerging international community called Gwinnett, one example could involve a student exchange program that will bring students from Brazil to Georgia State University.

Brazil selected GSU as a partner in its efforts to strengthen the country’s domestic economy by educating its young people across the globe. This affiliation would seem to offer the opportunity to improve on relations between metro Atlanta and one of the world’s fastest growing economies. However, there has been little public discussion of the exchange since it was announced in September.

Katz simply observed: “Miami has been dragged out of the recession by Brazilians. … For Atlanta, the issue is not just to go with the flow, but to understand who are your trade partners, and be purposeful in trading with them.”

In terms of trade, Katz said Atlanta’s airport is a tremendous economic advantage. However, the trick will be for Atlanta to add value to an exchange that occurs at the airport, and not to become a mere transit hub.

“One of the main messages I’ll have is that Atlanta, because of Hartsfield-Jackson, is a major switching point, a major logistics hub for the world,” Katz said. “But to prosper as a broad community, you don’t want to take stuff other people make and just shift it to other people. You want to make some of it yourself. So I’ll be looking at jobs that come from manufacturing and feed manufacturing: special CAP finance, trade, and logistics.”

Katz said he’ll also look at the region’s networks of arts and culture. The ARC has recently taken over the regional oversight of the cultural amenities from the Metro Atlanta Arts and Culture Coalition, which grew from an initiative of the Metro Atlanta Chamber of Commerce.

“Arts and culture, the creative sector, fits into a new kind of place-making that’s happening in the U.S., where there’s a regeneration of core cities and some surburban nodes that have an urban quality,” Katz said.

The prism of Katz’s outlook is his chair at Brookings and his work with the Obama administration.

Katz is founding director of Brookings’ Metropolitan Policy Program, which says on its webpage that it “aims to provide [leaders] with policy ideas for improving the health and prosperity of cities and metropolitan areas.”

With the administration, Katz led the housing and urban transition team and served during the first 100 days as a senior advisor to Shaun Donovan, secretary of Housing and Urban Development.

Click here for information about the ARC’s 2012 State of the Region breakfast.