Forget Charlotte. Metro Atlanta’s rival for the title of the southeast’s most globally connected city may well be Greenville, S.C. 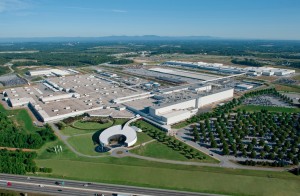 The Greenville-Spartanburg corridor punches far above its weight in terms of foreign exports. Greenville, by itself, ranks as the 11th most export-intensive metro area in the nation, according to a joint report prepared by the Brookings Institution and JP Morgan Chase for the Global Cities Initiative.

Metro Atlanta, on the other hand, has lost ground over the past decade among the nation’s 100 largest cities in terms of the proportion of its output that was exported. Metro Atlanta now ranks with Harrisburg, Memphis and Little Rock for exporting less than 15 percent of the output of their top industry, according to a new report from the Global Cities Initiative.

That leading industry for the four cities is travel and tourism. It is measured as an export when those who are traveling through, and touring around, are from other countries.

Attention is returning to exports partly because of the Global Cities Initiative has released its annual data report and briefing, titled, Export Nation 2013: U.S. Growth Post-Recession. Atlanta is included as one of the nation’s 100 most-populated metro areas. 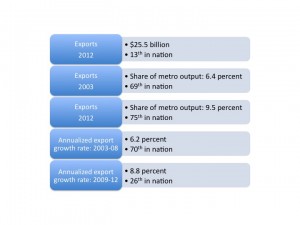 Metro Atlanta’s export results are a mixed bag, according to an official with the Metro Atlanta Chamber. Click on the image for a larger view. Credit: Global Cities Initiative/David Pendered

The results for metro Atlanta are mixed, according to Ric Hubler, senior director of global business growth at the Metro Atlanta Chamber.

“The story of this snapshot, if you were to boil it down, is that you’re seeing growth, but at the same time there’s room for improvement,” Hubler said.

“Our economy is very diverse, in terms of goods and services,” Hubler said. “You’ll see the make-up of exports is about 55/45, goods to services. That is a change over what we’ve seen in the past, when services were dominant. We’ve seen a resurgence in manufacturing.”

Metro Atlanta intends to bolster its export economy. Metro Atlanta and Georgia have long conducted foreign trade missions. The approach fits well with an initiative of the Obama administration, which calls for increasing the value of exports as a way to compensate for sluggish demand in the domestic economy.

Earlier this year, metro Atlanta joined more than a dozen U.S. cities participating in the five-year Global Cities Initiative, launched in 2012 by Brookings and JP Morgan Chase. The program intends to help city leaders strengthen their local economies by growing their export economy. 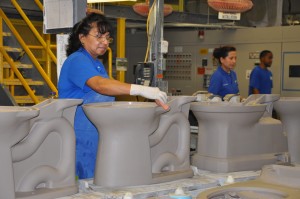 Products built in the Toto U.S.A. manufacturing plant in Atlanta are shipped to dealers throughout the Americas. File/Credit: Donita Pendered

The concept is part of the view that Brookings scholar Bruce Katz discussed at the ARC’s 2012 State of the Region breakfast – that cities must resolve their issues because the days of federal aid are waning. Katz directs the GCI.

Hubler said Atlanta’s first step is to assess its companies to determine the goods and services that could be exported. By summer 2014, the assessment will be complete in the 29-county region and work is to begin on a strategic plan to boost exports.

“We want to know where they are exporting and where they need assistance, and where do we have the biggest opportunity for impact,” Hubler said. “From that, we can determine where are the opportunities all around the world.”

Civic leaders in Greenville-Spartanburg followed a similar approach as their textile factories were closing in the mid 20th centure, according to a June report by Brookings, The 10 Traits of Globally Fluent Metro Areas:

“Local and state leaders began a push to diversify the regional economy, particularly by attracting advanced manufacturing sectors like automotive and advanced materials. … The presence of large global manufacturing and advanced industry firms has placed Greenville-Spartanburg on the world map, and the region is now one of the largest industrial hubs in the South.”

Previous Article
A circular journey into one’s soul through an Atlanta labyrinth
Next Article
The Atlanta Race Riot of 1906: Why it matters 107 years later