Bob Perciasepe, the acting administrator of the EPA, took about a nanosecond to recall the old Atlantic Steel mill near downtown Atlanta.

This undated photo of the Atlantic Steel mill in its heyday shows the extent of the site’s revival as a live-work-play community. Credit: EPA

Perciasepe picked the area that now is Atlantic Station as his example of metro Atlanta’s national reputation for turning brownfields into vibrant communities: A place known to execute plans that are big, bold and game-changing.

“Atlanta’s been working on these ideas for quite a while,” Perciasepe said.

Perciasepe was in Atlanta last week to deliver the keynote speech at the 15th annual National Brownfields Conference.

Two Atlanta leaders were featured at the event. Atlanta Mayor Kasim Reed attended and was commended for his administration’s efforts to promote sustainable development. Urban planner Ryan Gravel, who proposed the concept that became the BeltLine, spoke at the opening plenary session. 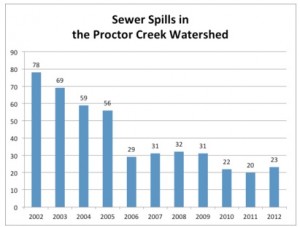 The number of sewage spills in the Proctor Creek watershed has been reduced dramatically through Atlanta’s repair of its antiquated sewage system. Credit: City of Atlanta

Proctor Creek is the latest example of Atlanta’s efforts to reclaim an area where the natural environment has been largely lost to urban blight.

The creek basin begins near the Atlanta University Center, covers 16 square miles and is home to more than 128,000 residents. For decades, the basin has been overrun with tire dumps, brownfields, flooding, and the sewage overflows that only in the past decade were addressed – by the federal consent decree that called on Atlanta to stop polluting its waterways.

The EPA announced May 17 that the federal government has joined the fight – in a big way. The basin was entered into the Urban Waters Federal Partnership, as one of just 11 new areas named to the program that now operates in 18 communities nationwide, according to the EPA.

“The revitalization of Proctor Creek will transform neighborhoods throughout northwest Atlanta,” Reed said in a statement. “With the help of federal and community partners, this effort will spur economic development, connect communities with new recreation opportunities and green space, and integrate critical investments in storm and wastewater management. This public-private partnership demonstrates Atlanta’s commitment to becoming a top-tier sustainable city.”

Perciasepe said these types of partnerships are the future for reviving the older cores of America’s cities into communities that are attractive for modern uses.

In another example, Perciasepe cited the Atlanta Streetcar. Part of the funding comes from a federal Tiger grant, which includes in the selection process the award of extra points if projects address brownfields, he said.

Perciasepe  said this is collaboration is type of work that he enjoys at EPA, but which receives less attention than some of the agency’s enforcement roles.

“This isn’t a face of EPA that most people think about,” Perciasepe said. “The big picture, the broader mission of environmental and public health, is that all of these efforts make communities more healthy and more livable. The next thing that happens is jobs come there, and all of a sudden people aren’t spreading out in unsustainable sprawl.

“It’s an amazing confounding of benefits, when all of this works together,” Perciasepe said.