Some truly jaw-dropping numbers that reveal the harrowing impact of the recession on transportation funding in metro Atlanta were presented Wednesday to the board that oversees GRTA. 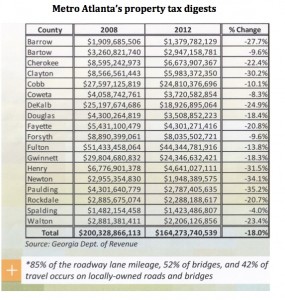 Property tax digests are down an average of 18 percent since a peak in 2008. Credit: ARC analysis of Revenue Department information

All the numbers relate to the amount of money that will be available to build and maintain roads and bridges, and transit. The revenue figures are down – across the board – from federal to state to local dollars.

Here’s a wry observation of Georgia’s expected share of the federal transportation bill that President Obama signed  in 2012: “We were excited to see it, until we began to look at the money in it,” said John Orr, a senior planner with ARC who made the presentation to GRTA’s board.

Orr’s presentation began with this telling remark: “Core transportation funding sources are not keeping up with population growth and needs.”

The numbers in Orr’s report speak for themselves:

Local level property tax digests are down an average of 18 percent from peak 2008 levels. Why it matters – counties pay for local road projects and transit systems with property tax revenues.

Statewide sales tax receipts are down 14 percent from peak 2007 levels. Why it matters – local governments use sales tax revenues to match federal aid projects, and MARTA uses sales taxes to pay for operations and capital improvements.

Motor fuel sales down 18 percent from peak 2007 levels. Why it matters – taxable motor fuel sales is the basis of transportation spending at federal and state levels.

Federal funding for transportation is declining. Why it matters – federal funding pays for the biggest proportion of expansions in Georgia.

The following funding cycles show the difference in funding projections between the existing Plan 2040 and the federal transportation budget:

The only item not expected to decrease is cost. The latest adopted alternatives included in Plan 2040 drive forecasted costs up from $2.77 billion to $4.64 billion.