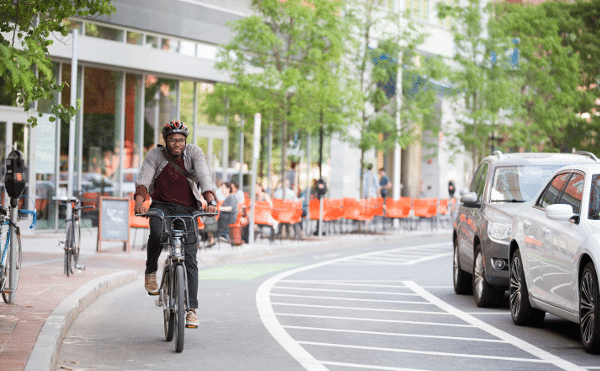 You may know Atlanta as the “City in a Forest,” but to NiAya El Jamah and many others who bike in the city, Atlanta might as well be called the “City of 100 Hills.” That’s one reason why the Atlanta Bicycle Coalition is working to connect the city’s ridgelines (Peachtree Street) and rail lines (Lee Street and DeKalb Avenue) with protected bike lanes to make it easier and safer to bike. 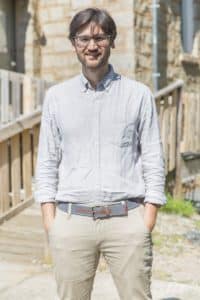 Then the next day, the Midtown Alliance Steering Committee – composed of staff and consultants – will take one step closer to deciding the fate of Peachtree Street in Midtown when they make project recommendations for the Midtown Transportation Plan.

As a member of the Steering Committee, we’ve consistently supported their emphasis on building a network of bike lanes that connect and protect people on bikes and we’ve drawn the committee’s attention to the significant benefits of protected bike lanes on Peachtree Street.

We’ve also taken our vision for protected bike lanes directly to the business community on Peachtree Street. Prior to Atlanta Streets Alive, in June, we canvassed a variety of businesses to gauge their level of support for protected bike lanes. The general response from the business community was favorable. Numerous businesses and companies felt that bike lanes would be a good addition to Peachtree Street.

Brandy Ramsey, general manager for TAP, on Peachtree and 14th, sent an email to Midtown Alliance supporting our vision, closing her email with a sentiment we all share. “Let’s bring more business to Midtown.”

Across the street, Colony Square, the transformative mixed-use development with a mobility concierge, responded on Facebook with an emphatic, “YES! It would nicely complement the bike valet we’re adding, and take Atlanta one step closer to becoming a more walkable city.”

“Since Peachtree Street is the main arterial road going north to south, it only makes sense to have bike lanes that are protected,” said Heyward Wescott, owner of Custom Signs Today and longtime supporter of Atlanta Streets Alive. “We will all win by sharing the road.” 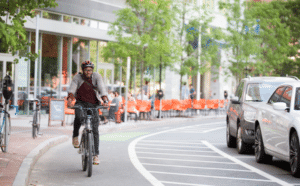 Peachtree has been an endless source of hope and frustration for people who bike or hope to since the 1990’s. Times may have changed, but Peachtree’s prominence as a key corridor for people who bike continues to grow. Cycle Atlanta data and a recent analysis by the Midtown Alliance show that more people use Peachtree Street than any other North-South corridor in Atlanta — including the existing bike lane on West Peachtree.

In a flash poll conducted at last month’s Atlanta Streets Alive, the Atlanta Bicycle Coalition’s award-winning open streets initiative, which drew 98,000 people to Peachtree Street, 99 percent of respondents said they would visit Midtown more often if there were protected bike lanes. Another 80 percent would rather bike on Peachtree Street than West Peachtree or Spring Street. We expect an increase in bicycle traffic on Peachtree Street when the new Relay Bike Share System comes to Midtown.

The Midtown Transportation Plan, however, contemplates re-routing people on bikes to West Peachtree Street, with its hills and highway mentality, even though there’s already a segment of bike lanes on Peachtree Street between Ralph McGill and Pine Street.

Why divert people who bike to West Peachtree, when all the data supports bike lanes on Peachtree Street? The truth is we need to decide what kind of street we want Peachtree to be. Do we want it to be a complete street that accommodates cars AND people biking and walking, or just cars, as it has been for decades?

Even Midtown Alliance’s Parking Assessment and Action Plan notes the “perception exists with prospective retailers that there isn’t enough parking in Midtown,” even though “considerable walk up traffic occurs today.” The assessment also documents a noticeable “trend toward driving less [and an] uptick in transit ridership.”

What this really means is Midtown lacks convenient door-to-door parking, an elusive quest. By these standards, the appetite for the perfect parking spot for every single person entering Midtown will never be completely satisfied. Our vision would add on-street parking to protect bike lanes, a hybrid solution that benefits everyone. If car parking were installed alone, instead of bike lanes, we would continue to reinforce the perception that driving is the only solution. 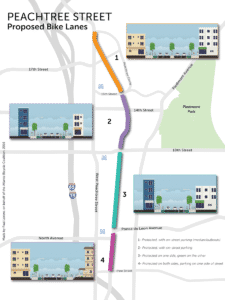 That approach plans for a future that no longer exists — all the evidence points to an increased demand for more varied transportation options including car services on demand and transit. (Midtown Alliance, in fact, links to several articles under the “Mobility trends and research section” of its Midtown Transportation Plan website citing the decrease in driving among millennials, the rapid growth of car-sharing apps like Uber, and the rise of autonomous (driverless) vehicles.)

As big supporters of local businesses and retail, we applaud the Midtown Alliance’s desire to grow retail on Peachtree Street. Midtown Alliance and the Atlanta Bicycle Coalition have a common interest in supporting retail growth in ways that go “beyond parking.”

The growing body of research makes it clear that protected bike lanes are good for business and for people who drive. A 2014 study by the New York City Department of Transportation found that on streets with protected bike lanes, travel times improved while vehicle volumes stayed the same. Crashes and injuries decreased even though bicycle volumes dramatically increased, and retail sales increased significantly compared with similar corridors without protected bike lanes.

In Salt Lake City, businesses found that when you “remove parking and add bike lanes, sales go up.” While bike traffic increased 30% following installation of the bike lane, there’s another likely reason for the increased sales: “…as on New York City streets, which found extremely similar results in a similar 2013 study of sales tax data — Salt Lake City’s experience shows that bike lanes are typically best for business when they’re part of a general rethinking of the street to make it a more pleasant place to linger.”

Protected bike lanes on Peachtree Street is the logical next step for Midtown’s growing bicycle- and pedestrian-friendly culture. Regardless of the outcome, we will continue to work closely with our coalition partners and Midtown Alliance to build the bike network and ensure everyone has safe, equitable access to Atlanta’s signature street — no matter how they choose to get there.