That was the message delivered with a standing ovation at the retirement celebration Wednesday for the outgoing president and CEO of Midtown Alliance.

Actually, the full accolade for Susan McNeill Mendheim came from from Harald Hansen, the retired chairman and CEO of First Union National of Georgia and a former chairman of Midtown Alliance:

Mendheim looked around the crowded room of The Peachtree Club and spotted Steve Nygren, who chaired Midtown Alliance when Mendheim came aboard.

“I want to thank you, Steve Nygren,” Mendheim said. “Thank you and everybody in between.

“Thank you, thank you. That’s all I can say. The product speaks for itself. It certainly is your product. I absolutely know it’s going to get better and better and better. And I’m going to be right here enjoying the heck out of it.”

Mendheim is a rare leader in the folklore of Atlanta’s urban renewal. 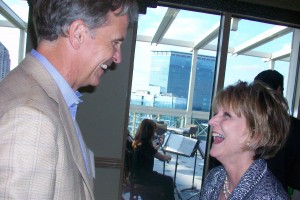 Mendheim leads by creating consensus. The capstone is the Blueprint Midtown, a planning document established in 1997 with so much community support – more than 1,200 people participated – that it is revised rather than revisioned.

The consensus approach stems from Mendheim’s belief in the concept of servant leader, according to Shannon Powell, the alliance’s EVP and COO.

The blueprint created today’s vision for Midtown – a vision that ranges from restricting highrise buildings to the Peachtree corridor to specifying the shape of awnings that may span sidewalks. The blueprint is codified in Atlanta’s zoning ordinance.

Developers show the blueprint to lenders to provide an assurance that their investment would be secure in Midtown. That was just one of the blueprint’s many values, Bob Voyles said in 2003, when he was with Hines heading the development of 1180 Peachtree.

The blueprint provides a similar assurance to investors today, said Beau King, a partner with Voyles. King is the son of legendary developer Kim King, whose Centergy project at 5th Street enabled Georgia Tech jump across the Downtown Connector into Midtown.

“Finance and capital are the lifeblood of real estate development,” King said. “We are in the midst of the worst recession in memory. But having the blueprint in place does help people feel more secure about their investment.”

Public safety is especially important in an urban area like Midtown. Wayne Mock, the alliance’s public safety manager, said Mendheim has provided a unique level of support for the team he oversees.

“I was a young police officer in 1966, walking a beat in Midtown,” Mock said. “I was fresh from Vietnam and I thought many times that I’d been safer in Vietnam.  We’ve made a lot of changes in 45 years in law enforcement here, and I have never had a direct report support me as you do.”

The ceremony for celebrating Mendheim was relatively brief, occuring in the middle of an event intended to provide plenty of time to talk. Friends provided Mendheim with tickets to various Midtown venues. Two governments joined in with their accolades:

Mendheim was characteristically low-key as she made her final remark to the 100 or so gathered to toast her accomplishments. The understated event was held on the 28th floor of the 999 Peachtree building.