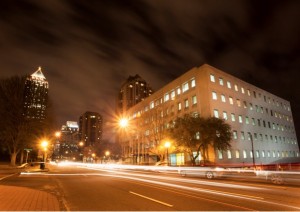 This glamor shot of the Arthritis Foundation building highlight’s its appeal for conversion to homes and shops and/or restaurants. Credit: cityreality.net

Both projects are on West Peachtree Street and within a few blocks of each other. Both continue an uptick in construction this year that Midtown Alliance has highlighted.

The projects continue a surge in construction that the Midtown Alliance highlighted in a June report.

The amount of construction launched by mid-year 2014 is roughly equal to the space delivered in all of 2013, at least in two of three reported categories: 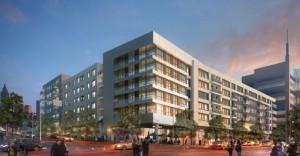 The Hanover Co. won praise from the Midtown DRC for the design of retail shops to face 10th Street. Credit: midtownatl.com

At its meeting Tuesday, the Midtown DRC took a second look at the proposal by Hanover Co. for a new six-story building. The structure is to provide about 328 residences, with 14,600 square feet of retail that’s to front on 10th Street, according to the DRC meeting report.

At its June meeting, the DRC commended Hanover for locating the parking deck behind retail shops, where it is not visible from the street. The DRC also commended the design of the street-level retail shops.

However, the DRC in June raised issues with the proposed loading zone that was sited along West Peachtree Street. A concern about access along the street also was raised, according to Midtown Alliance’s report of the meeting.

Hanover returned to the DRC on Tuesday with a revised plan that did win approval.

The committee again commended the plans for the street-level retail and observed that the future shops are, “well integrated into the project and located on an emerging retail corridor anchored by Georgia Tech on the west and Piedmont Park to the east.”

Click on the image for a larger version of the development summary produced by Midtown Alliance. Credit: midtownatl.com

Urban Realty Partners won the DRC’s approval for a plan by the architecture firm PRAXIS3 to retool a former office building into 98 apartment units and about 5,000 square feet of street-level space intended for use as retail and/or restaurant.

The property at one point was represented by City Realty Advisors. The company reported the structure was built in 1950 as the headquarters of the John Hancock Life Insurance Co.

The Arthritis Foundation bought the building and, in 1996, renovated the five story building that provides 89,000 square feet of usable space across five floors, plus three floors of structured parking that provide 161 spaces, according to the synopsis provided by City Realty Advisors.

The Fulton County Tax Assessors has set the market value of the building and its ¾ acre site at about $8.8 million.