The Mayor of Midtown has left us.

Larry Steven Collins was the man who knew everybody’s name when they walked in the door at the Sig Samuels drycleaner at the corner of Monroe Drive and Eighth Street.

Collins, 54, passed away on Wednesday, March 16 after two years of fighting ALS or Lou Gehrig’s disease.

It’s hard to describe what a vital community role Sig Samuels and the Collins family have played in Midtown. It has been the unofficial gathering spot and meeting ground for people picking up or dropping off their laundry.

The windows of the historic looking storefront often are plastered with all kinds of community notices and election posters. And then there’s the role that all the Collins brothers and family members have played in sharing tidbits of information of what’s happening in our town. 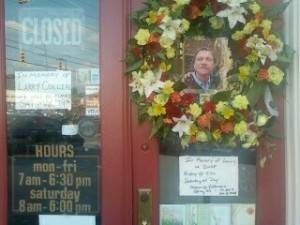 So at Friday night’s visitation at the H.M Patterson’s funeral home, it was not surprising to see people from all walks of life, such as U.S. Rep. John Lewis and hundreds of other faithful friends and customers, come to pay their respects to the family.

The stories of Sig Samuels and Larry Collins are legendary.

My former colleague at the Atlanta Journal-Constitution, Dick Williams, once told me a wonderful story about Sigs. He had been a regular customer for years when he lived in town. But that changed after he had moved out to Dunwoody.

Dick told me that one day, after an eight or 10-year absence, he was in the neighborhood and decided to drop off his laundry at Sigs. He walked in and was greeted with a “Hello Dick” as though he had just been there a week before. 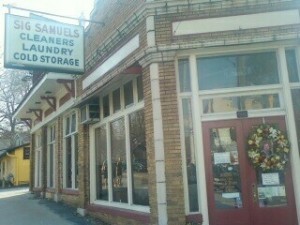 The warm, cheerful and the personal greetings — even given to irregular customers — were as amazing as they were genuine.

Walking home tonight (Saturday evening) from the movie theater, I noticed Matthew Cardinale of the Atlanta Progressive News place some flowers by the door. Please read his wonderful piece about Larry Collins that he just posted on APN’s website.

But Matthew left out of his obituary a wonderful personal story about Larry. Matthew doesn’t drive a car, and sometimes when he would go pick up his dry-cleaning, he would have a taxi come by and take him and his laundry home.

One day, the taxi did not come. So Larry then drove Matthew home himself. After that, every time Matthew needed a ride, Larry was there to give him “door-to-door” service. It doesn’t get any better than that.

At the funeral home, another former colleague — Walter Woods — was there telling me his own tales of how Larry and the family had special ways to reach out to customers, especially when they might be going through their own difficult moments in life.

“Larry was the mayor of Midtown,” Walter said. 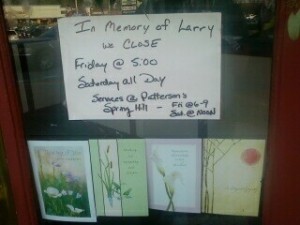 Today is a difficult time for the Collins family, and it’s a time for us to reach out to them. They are lucky and we are lucky that it is such a close-knit family — from his mother, Mary Collins; his wife, Sheila Collins; his sons — Steve and Adam Collins; his three brothers — Tom, Mike and Jim Collins; as well as his sisters-in-law, his nieces and nephews and other members of his extended family.

And you will find most of the family members, day-in and day-out, behind the counter at Sig Samuels (known as “Sigs” to those of us in the hood) greeting you by name, giving you the ultimate customer service you’ll every find in Atlanta or anywhere.

In many ways, Sigs is Midtown’s City Hall; only now it’s minus our mayor.

In lieu of flowers, donations can be made to the Emory ALS Center.