Mike Thurmond vows to turn around a divided DeKalb County

When Mike Thurmond won the Democratic primary election on May 24 for CEO of DeKalb County with 72 percent of the vote against two opponents, he drew support from all parts of the county.

That’s how he can conclude a 90-minute exclusive interview with Atlanta Business Chronicle that focused on some of the most contentious issues dividing DeKalb with an expression of hope.

“I’m so excited and optimistic about the future of DeKalb County,” Thurmond said. “We will be recognized as a national model of local governance. We are going to figure it out. We are the land of opportunity in the metro area.” 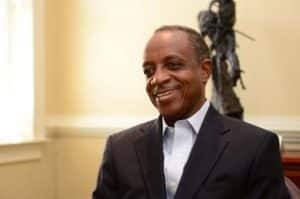 Thurmond will face Republican Jack Lovelace, a retired police officer and accountant in the November general election. But because DeKalb is overwhelmingly Democratic, Thurmond is considered to be the presumptive incoming CEO of the county.

And Thurmond is wasting no time doing what he can to heal the divide between the north and south areas of the county.

It’s a divide Thurmond, a student of history, says has existed for decades – even when DeKalb was predominantly white. “Once you add class and race, it’s gasoline and fire,” he said.

Much of the interview focused on the proposed redevelopment of the former General Motors plant site in Doraville. Atlanta real estate developer The Integral Group has proposed to build a comprehensive mixed-use development for the site that would include offices, a town center, a park, a film studio and residences connected to the Doraville MARTA Station and the city of Doraville.

But for that to happen, about $180 million in public infrastructure is needed – including a $50 million “covered” street under the railroad and MARTA tracks to make the site accessible for transit.

The project has stalled because the DeKalb Board of Education has not approved, or even had a public meeting to discuss, a proposed tax allocation district (TAD) for the project. DeKalb County and the City of Doraville have already approved the TAD.

“The Doraville redevelopment is yet another symptom of the problem that has bedeviled DeKalb County for decades,” said Thurmond, who added the problem isn’t the TAD. “We’ve got to elevate ourselves out of this us-versus-them crap. It impacts every issue that comes up, and we are all suffering as a result.”

Thurmond views the situation from an amazing historical perspective. He was the state’s labor commissioner when it was announced the GM plant would shut down.

Later he served as the interim DeKalb School Superintendent when the school system’s accreditation was threatened.

But Thurmond can also see it from the school system’s point of view.

“No one is more sensitive to the realities of a bankrupt school district than I am,” said Thurmond, who faced a $14 million budget deficit when he became superintendent. “We couldn’t buy books. We couldn’t pay teachers. We couldn’t fix school buses. Today there are $124 million in reserves. I can understand why the superintendent and the school board would be concerned about protecting the financial stability of the school district. I have to see it from the position of the folks I’m dealing with.”

But Thurmond also is a strong believer in the public having a voice on he Doraville project financing.

“What really needs to happen is a public airing,” Thurmond said. “It has to be discussed in a public setting. The public has a right for a presentation on the pros and cons. Both sides should air their presentations, and the matter should be put up to a vote.”

Then Thurmond said that if “the school system decides not to engage or support the Doraville plant redevelopment, we will have to come up with alternatives.”

But the real challenge for DeKalb is to face the issue that has “bedeviled” the county for decades – the divide between north and south.

“It’s going to influence each and every project that’s brought to the table unless we address the root issue,” Thurmond said. “This decades-old issue that haunts everything we want to do.”

Besides, Thurmond said the “black-white, north-south political construct” is no longer valid.

“We are still fighting the last war and the world has moved on,” Thurmond said. “Today 21 percent of the students in DeKalb’s public schools come from homes where English is spoken as a second language. Go to the Clarkston High School graduation and the entire world walks across the stage. We speak 140 different languages in DeKalb County’s schools.”

Then Thurmond said there is one place when all of DeKalb County comes together – Your DeKalb Farmer’s Market on Ponce de Leon Avenue in Decatur.

Thurmond said he can’t help people better understand a TAD, but he knows the Doraville redevelopment is critical to the county’s future. But he also knows it is just as important to create jobs in the Stonecrest Mall area in southeast DeKalb. That area has some of the highest unemployment in the state, and it is only 15 minutes away from Hartsfield-Jackson Atlanta International Airport – one of the largest employers in the state.

As the presumptive CEO, Thurmond said, “I don’t feel like I have won an election. I feel I got hired for a job. The CEO position is an executive who has political skills.”

And then he brings his knowledge of history to the job.

“The GM plant opened up in 1947. Generations of folks had worked there,” Thurmond said. “The last minivan rolled off in 2010. At one time, it had 3,100 jobs – manufacturing jobs. The closure of the Doraville GM plant ripped the manufacturing heart out of DeKalb County.”

But as Thurmond sees it, now is the time to bring back DeKalb’s heart and soul.

“We are going to build a new winning coalition regardless of race and geography,” Thurmond said. “We will show that we can reject the politics of division and animosity and talk about building consensus and cooperation. We have to create a new model.”