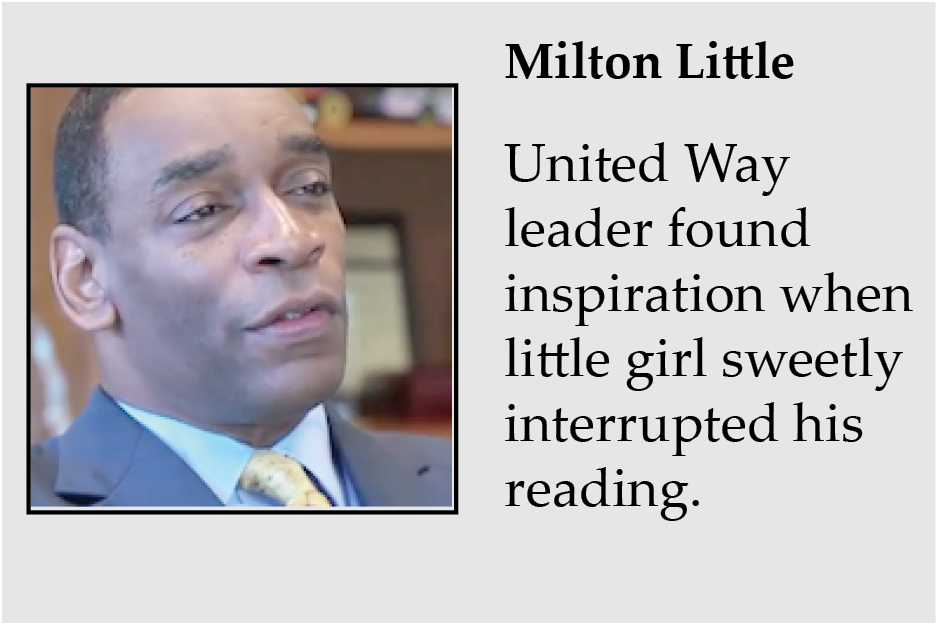 Milton J. Little, Jr. was working for a nonprofit education and social policy research organization in New York City in 1989, when his outreach to the disadvantaged suddenly got up close and personal.

Little, the current president of United Way of Metropolitan Atlanta, has worked in the corporate and nonprofit worlds since he graduated from Morehouse College and got his masters in sociology from Columbia University.

He grew up in New York, where his dad had been an electronics technician and his mom taught sixth grade at a Queens public school. But on that particular Sunday afternoon, Milton was volunteering in a homeless hotel in New York, reading a book to a roomful of children when suddenly the youngest girl entered his space.

“I felt I was doing a good job of giving back because of my profession,” he said in our accompanying video. “She decided she was going to crawl in my lap; she put her arms around me and kissed me on my cheek and told me to ‘keep reading.’

“What that did for me was it committed me to doing more than living a communal life through my profession. It told me I needed to become much more personally involved in my community. From that, I launched the New York City Outward Bound board and became one of the early board members. And that became a platform for a life of volunteer work that didn’t exist before that little girl kissed me on the cheek.”

Four years later, Milton became a VP at AT&T, where he developed philanthropic strategies for the company. He later worked at Lucent Technologies before joining the National Urban League, eventually becoming its CEO. When he became president of United Way of Massachusetts Bay, he helped the organization become more efficient, merging with its sister program in the Merrimack Valley. In 2007, United Way of Metropolitan Atlanta made him its first African-American president.

Atlanta’s workplace campaign is the third largest in the nation, behind Seattle and Minneapolis. In the last workplace campaign, the metro Atlanta community contributed $80.4 million, a $200,000 increase from the previous year.

Under Milton’s leadership, United Way and its volunteers are asking partners who apply for grants to provide much more detailed accounting, documentation and success stories – part of a desire to show that United Way is making a real difference in the areas of education, income, health and ending homelessness.

In addition, the organization’s homeless outreach has increased, providing services for 1,400 clients in the past year. Milton continues to participate in these programs personally, a direct impact from that little girl’s suggestion that he “keep reading.”

“I have the opportunity to engage more and more Atlantans in the process of giving, advocating and volunteering on the community’s most important human service issues.
And it’s not enough for me to witness community action through an office window,” he said. “Getting involved on a personal level to help families and communities thrive is very important to me and this organization.”

Next week in Moments: Bill Tush, who wandered into Ted Turner’s TV station and into a 30-year career with many wacky moments.