“Minari” is one of those movies. Brad Pitt is the executive producer, and Steven Yuen, one of the most popular stars of “The Walking Dead” (back when “Walking Dead” was deservedly popular) plays the lead.

It’s an immigrant story, set in the 1980s, about a Korean-American family who moves from California to some hardscrabble farmland in Arkansas. That they are ethnically different is an aspect of their story, but it’s not the aspect.  While it never ignores their cultural background, “Minari” is not a movie about prejudice. 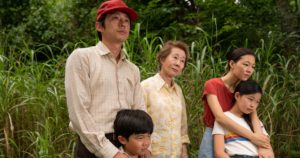 It’s about so much else, it doesn’t need to be: Family, hard work, adjusting to a new community, facing disaster, and, much of the time, just trying to figure out what to do next in order to survive.

Jacob’s (Yeun) pursuit of the American Dream is the geographical opposite of the Joads in “The Grapes of Wrath.” They headed west from the Dust Bowl; he sees promise in the farmland of the Ozarks where he hopes to raise Korean vegetables to appeal to an increasingly diverse America. His kids, plucky, obedient Anne (Noel Cho) and mischievous six-year-old David (Alan S. Kim), think their new place – a mobile home on blocks – is pretty nifty.  His wife, Monica (Yeri Han), is supportive, but not so sure. She worries about David who has a heart condition – and there’s no hospital close by.

Plus, while they strive to get the farm going, they both keep working at the old jobs they had in California. It’s called sexing chickens, and it’s part of the picture’s oddball charm that you will learn a lot more about this obscure profession than perhaps you ever wanted to know. 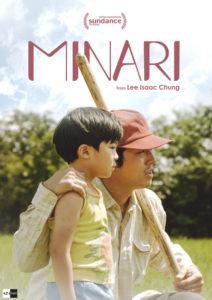 With both parents working – to say nothing of trying to start a new business – they decide to bring Monica’s mother over from Korea to help with the family. Her arrival only makes a rich film even richer.  Soonja (Yuh-jung Youn) is neither your overly strict Old-World Grandmother nor your adorable smells-like fresh-baked-cookies sweetheart. She’s very much her own person: a hard-drinking, card-playing older lady with a playfully foul mouth. And she does not smell like cookies; rather, in David’s disgusted opinion, she “smells like Korea.”

Based on director Lee Isaac Chung’s own memories of assimilation and family interactions, “Minari” is an unusually captivating film that calls to mind, more than anything else, the works of the late Francois Truffaut. Like the famed French director, Chung understands the complexities of the human heart – and why they can often make us laugh as much as anything else.

“Minari” is about as close to perfection as a movie gets.

“Minari” opened in local movie theaters on Feb. 12. It will be available on premium on-demand services beginning Feb. 26.