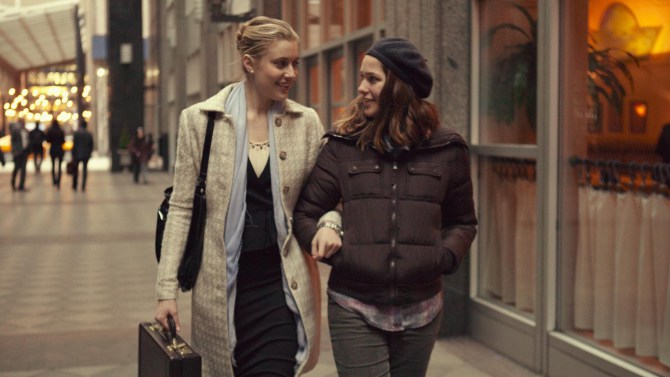 Make that, Baumbach and his main squeeze/ muse, Greta Gerwig, who, along with co-writing “Mistress America,” is also one of the film’s stars.

The other one is Lola Kirke who plays Tracy, a freshman at Barnard. Tracy isn’t crazy about college.  She describes it as “like being at a party where you don’t know anyone all the time.”

She mostly seeks out the 30-ish Brooke because, in a few months, they’ll be stepsisters. And Brooke — glamorous, older and full of half-realized (at best) dreams — makes quite an impression.

Brooke is also great fodder for a short story, which is convenient for Tracy since the only thing about college she does like is a snobbish, briefcase-toting literary society who inducts their members with a midnight pie-in-the-face (sooo frat-boy-ish).

That leaves her at loose ends, which is another reason she looks up Brooke. The pair take to each other instantly, and soon Tracy is being treated to the Brooke tour of New York, as well as to the older woman’s many projects, past, present and future. 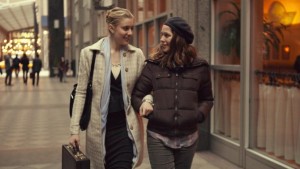 Currently, Brooke is making plans to open a restaurant-cum-hair-salon in Brooklyn.  Her absentee Greek boyfriend Stavros was to have provided the funding, but as apparently happens on many of Brooke’s projects, things don’t work out.

A mere bump in the road for Brooke. She immediately hatches a new plan: she’ll head to suburban Connecticut where her wealthy former boyfriend and her former best friend (now his wife) live.  That the latter stole both her guy and her business idea doesn’t deter Brooke. For Lord-knows-what reason, she has complete trust in her erratic charisma.

More complete, perhaps than she should. Self-knowledge isn’t one of her strong points. The house party in Connecticut turns into a strained farce.

It’s supposed to be amusing and, perhaps, revelatory. But it’s more like a Brooke project; that is, another dead-end.

As is “Mistress America.” Which – again, like its protagonist – is all set-up, no follow-through.

Before Baumbach met Gerwig, he made brilliant movies like “The Squid and the Whale.” Now he’s doing sub-par Woody. Maybe it’s time to find a new muse.