Milledgeville – Tom Baxter wrote on this page last week that one of the disappointments of visitors from Japan is the discovery that they couldn’t visit Tara because it was a product of Margaret Mitchell’s imagination.

An approximation of the world that fueled Mitchell’s thoughts does remain visible in a town less than two hour’s drive southeast of the state Capitol – Milledgeville, which served as the state capital before and during the Civil War.

The town is rich in history of the war and way of life that was a precursor to the Civil Rights movement, which is commemorated in Monday’s observance of Martin Luther King, Jr. Day. Milledgeville today is a town at a crossroad as residents prepare for life after job losses related to the Great Recession. 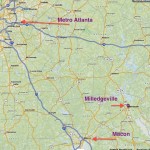 The trip to Milledgeville from Atlanta crosses some of the same terrain traversed by Union Gen. William T. Sherman and the Left Wing of his force on its March to the Sea. The campaign in 1863 marked the beginning of the end of the Southern war effort.

In Milledgeville, slave shackles are on display in the museum at the Old Capitol Building. Nearby is a display that will be up through June 9 – one titled “Tenting Tonight on the Old Campground,” a recreated Confederate encampment with a full size tent, camp furniture and the sundry items a soldier would keep at hand.

The Old Capitol Building itself is impressive, though its original brick exterior is covered in a facade. The building is on the highest point in Milledgeville and adjacent to the Georgia Military College. The Georgia Legislature created the college in 1879, and it now serves as a two-year junior college and prep school for grades six through 12. 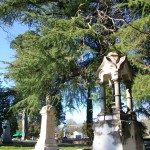 Memory Hill Cemetery has been a burial ground since the early 1800s. Credit: David Pendered

The Memory Hill Cemetery contains the graves of a surprising array of noted individuals.

Author Flannery O’Connor may be the most highly known person buried there. There also are the graves of 10 state legislators who died between 1810 and 1845, and who were interred in Milledgeville rather than transported to their hometowns. Of note, tombstones don’t identify their home counties.

Dr. Benjamin Simmons is buried in Memory Hill, and the display in the gazebo notes that he was the town’s first African American physician. Near his placard is one for Susan Myrick, a newspaper columnist for “The Macon Telegraph” who consulted on Southern dialect and culture during the filming of “Gone With the Wind.”

The cemetery also has two dogs, Bruno and Nick. Their tombstones observe that each was a “faithful dog” of Mr. and Mrs. C.H. Bonner. Nick brightened their days from 1918 to 1926 and was followed immediately by Bruno, who died in 1931.

Milledgeville was busy and appeared vibrant on Saturday.

Numerous young people were out for a run, some no doubt burning off concerns about their coursework at Georgia College. Others were out for strolls along West Hancock Street, stopping for pizza, calzones or sandwiches at the Brick restaurant or ducking in for a hot beverage and snack at Blackbird Coffee.

Yet Milledgeville has been hit hard by globalization of manufacturing and the closure of state correctional facilities.

Job losses in the Milledgeville region total well over 2,000 in the past five years. The state has closed four prisons or correctional facilities, and manufacturers of air conditioners and carpets have laid off local workers. 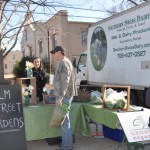 In these tough times, small-time farming is one glimmer of hope.

A consortium on Saturday opened the Local Harvest Farmers’ Market. About a dozen vendors brought products including greens, bread, dairy, meats and pickled goods. Most shelves were empty before the event closed at noon.

The market was sponsored by Live Healthy Baldwin, which battles childhood obesity, Milledgeville Community Garden Association, and the First Presbyterian Church of Milledgeville.

“We’re supporting access to locally grown, sustainable food,” said Debbie Harshbarger, one of the organizers. “This environment gives people a place to buy and sell healthy food, and it supports the community.” 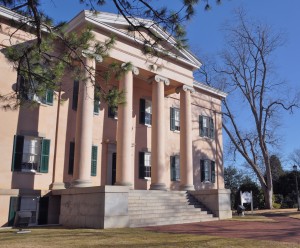 The former Georgia governor's mansion now is open to tourists, and a private portion has served as the residence of president of Georgia College. Credit: Donita Newton 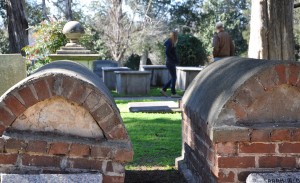 Memory Hill Cemetery has served as a burial ground since the early 1800s. Credit: Donita Newton 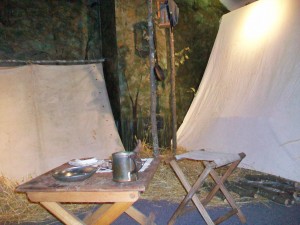 This exhibit of Confederate encampment will be open until mid June at the museum in the Old State Capitol. Credit: David Pendered 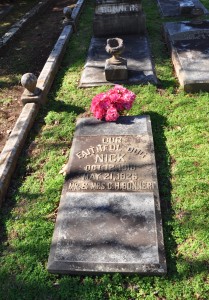 Nick, the family dog, was so beloved his caregivers provided him a resting place in the family plot at Memory Hill Cemetery. Credit: Donita Newton