MLK’s “Beloved Community” and the G-Word

An almost surefire way to start an argument in Atlanta is to utter the “G-word” – as in “gentrification.” In the heat of a torrid development boom, the inflow of affluent newcomers to Atlanta – and the uprooting of low-income residents that inevitably follows – is again revealing the racial and economic fault lines running through the city’s social bedrock.

The underlying issue of  housing affordability in Atlanta continues to roil the city, often making adversaries of those who should be allies.

But does it have to be this way? Is it possible to strike a balance between attracting much-needed development in struggling neighborhoods while also preventing longtime residents from being priced out of their communities because of rising taxes and skyrocketing property values?

The Westside Future Fund (WFF) and the Arthur M. Blank Family Foundation (AMBFF), along with the City of Atlanta, local residents, elected officials and private sector businesses are posing those questions and invoking the words of Atlanta’s favorite son in hopes of finding answers.

The not-for-profit WFF was established in December 2014 by the Atlanta Committee for Progress (ACP), a coalition of top CEOs and leaders from Atlanta’s private sector, universities and nonprofits in partnership with Atlanta Mayor Kasim Reed, as part of the ACP’s economic development mission, according to the organization’s website. Significant support was provided by the Arthur M. Blank Family Foundation and the Chick-fil-A Foundation. 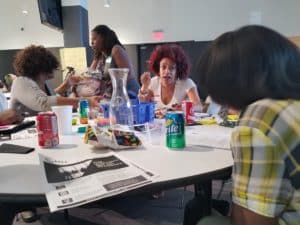 Based on Dr. Martin Luther King Jr.’s vision of a “beloved community,” the latest spasms of gentrification are producing sobering discussions about how to craft practical and sustainable solutions to address an intractable problem.

For decades, mostly poor and working-class African-American residents have been pushed out or deliberately excluded from the city’s toniest neighborhoods north and west if I-20. And now, projects such as the transformative Atlanta Beltline, are turning predominantly Black communities once considered undesirable into some of the most sought-after ZIP codes in town.

That trend is especially evident in the westside communities of English Avenue, Vine City, Ashview Heights and the Atlanta University Center. Residents there are facing a gentrification double-whammy: They’re within spitting distance of the Beltline’s westside trail and they’re also next-door neighbors to the billion-dollar Mercedes-Benz stadium.

Still under construction, the stadium will soon be the new home of the Atlanta Falcons and Atlanta United soccer team. As expected, the surrounding neighborhoods have become a hotbed of residential and community development and emerged as Ground Zero for gentrification.

Last week, King’s “beloved community” emerged as a prominent theme, first during a groundbreaking ceremony for a brand new park in Vine City named in honor of the late, Rodney Cook, Sr.  A white state lawmaker and city alderman, Cook distinguished himself  during the Civil Rights era and early ‘70s by building bridges with the black community. The new park will feature a statuary honoring civil rights luminaries including W.E.B. Dubois, the Rev. Hosea Williams, Dorothy Bolden and Cook.

Located along along Joseph E. Boone Blvd. the 16-acre park will cost $45 million to complete and is set to open in the summer of 2018.  Plans for also call for a 100-foot tall “peace column” with a statue of Chief Tomochichi, a native American leader who mediated disputes between European settlers and the indigenous people, perhaps a far more brutal precursor to modern-day gentrification.

During the groundbreaking ceremony, Atlanta City Councilman Ivory Lee Young, who represents Vine City, called for “protecting the interests of legacy residents” who have lived in the neighborhoods for years and understandably wish to remain as public and private sector improvements take shape.

Of course, everyone realizes achieving that goal is easier said than done.

On Saturday,  the AMBFF and the WFF co-sponsored a four-hour conference titled “Alternatives to Gentrification: Building the Beloved Community.” Inspired in large part by an essay written by Vine City resident D. Makeda Johnson, the meeting drew about 300 participants and included a keynote from Marc Morial, president of the National Urban League who was also the former Mayor of New Orleans in the years before the city was ravaged by Hurricane Katrina.

Morial correctly pointed out that other cities are also grappling with gentrification.

“Gentrification is just the reversal of the white flight of the 1950s and the 1960s,” Morial told the crowd. “White residents, out of fear, out of opposition to integration of schools and neighborhoods, decided to move to suburban communities across the nation. Behind them they left residents in the inner city, many times with poor public services, dilapidated housing and all of the difficult urban conditions. If we are not careful, all we’re doing is playing musical chairs.”

In a tangible effort to address the issue, the WFF and the City of Atlanta led by Mayor Reed launched the Anti-Displacement Tax Fund. The program, which kicked off in April, will help pay for increases to eligible homeowners’ existing property tax bills in the four target neighborhoods near the stadium. Starting in the 2018 tax year, the assistance will be distributed as grants that don’t require repayment.

The  anti-displacement fund is part of a larger commitment to revive and restore the target neighborhoods which are home to about 17,000 people. In addition to redeveloping those communities, the goal is to also build human capital through job skills training and other interventions.

As John Ahmann, director of the Westside Future Fund explained, “there really is no foundation for the beloved community if the people who live there and helped to build it can’t afford to stay.”

Liz Blake, a WFF Board board member, participated in the lengthy work session during the summit. She’s convinced that the organization’s approach to gentrification will be successful.

“You need a critical mass and you need it at a critical time.” Blake said. “You must be directed by the voice of the community and do everything to ensure they’re empowered. If not, you won’t be successful. But if you do, even the failures of the past can provide you with the jet fuel to propel you. If the commitment is real and sustainable, anything is possible. ”

While the WFF summit was promising, not everyone was impressed or optimistic about  keeping gentrification at bay or minimizing its impacts on low-income residents.

“I thought we’d be talking about real solutions and hardcore issues in terms of gentrification,” said Collette Mack, who has been living in Vine City for the last six years. Mack complained that much of the housing stock in her area is held by delinquent or absentee landlords and speculators whose only interest is cashing out when the real estate market peaks.

“I hear people talking today about programs to help with down payment assistance for first-time buyers,” Mack said.  But if the average prices of a home is $500,000 and you’re making barely above minimum wage, that’s not really helping you. That’s what frustrates residents and makes some of us angry.”