The Atlanta Streetcar is to be operating within 12 months, but its builders don’t have all the property the project will require. 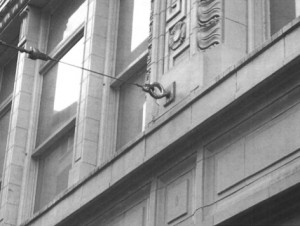 The streetcar system in Portland uses attachments like this one to suspend guy wires that hold up the power cable that provides electricity to propel the vehicles. Credit: URS via MARTA

MARTA is getting ready to start talking to companies it wants to hire to appraise 26 parcels along the streetcar route. The parcels are needed for purposes including two streetcar stops and a roadway realignment.

There’s also new trouble with stringing the overhead power cables that will provide electricity to propel the vehicles. Power cables may have to be strung from guy wires attached to buildings, in some areas, because utility poles can’t be installed above newly discovered basements.

In addition, access is needed to a dozen properties so that poles can be installed and the power cables suspended from the poles, according to the “Request for Expression of Interest and Statement of Qualifications” document issued by MARTA.

The list of parcels needed for either temporary or permanent easements for the streetcar project includes portions of properties at:

At least the overhead cable part of the problem has been known since September, according to MARTA documents. The latest list of properties where rights-of-way or easements are needed is dated Nov. 19.

MARTA now has the project on a fast track. Wednesday is the deadline for vendors to apply for the job.

Work is to be complete in June 2013. That is, unless the timeline is extended up to six months after that target, according to MARTA’s documents on the project. 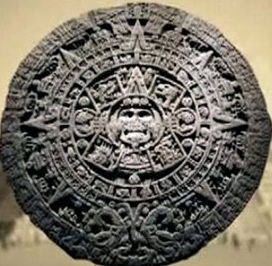 NASA scientists have determined that the Mayan calendar does not end on Dec. 21, 2012. The calendar simply starts a new cycle. Credit: space.com via scientificamerican.com

MARTA’s document is the latest indication that the streetcar project continues to be waylaid by unforeseen problems under Atlanta’s streets and sidewalks.

According to a Sept. 17 letter sent by the design consultant with URS to the project manager for the streetcar:

Atlanta’s public works commissioner, Richard Mendoza, did not specify this set of problems in his Nov. 28 update on the streetcar to the Transportation Committee of the Atlanta City Council.

Mendoza said simply that problems with underground utilities seem to get worse at every turn: “We’re finding that as we go out there, we discover more issues we were not aware of,” Mendoza told the committee.

Appraisers are to start work Dec. 21, unless the world ends that day, as has been forecast by an ancient Mayan calendar. NASA scientists have determined that the calendar predicts not the end of the world, but the beginning of a new age.