By Maria Saporta
As published in the Atlanta Business Chronicle on November 6, 2015

That’s the finding of the 2015 study by OnBoard, an organization that has monitored the number of women on Georgia’s corporate boards for the past 23 years.

OnBoard defines critical mass as a board that has at least three women who make up at least 25 percent of its members. A study by Wellesley College determined that was the threshold when women were really listened to.

In 2012, there was only one company in Georgia — Coca-Cola Enterprises Inc. — with at least three women directors representing more than 25 percent of the board, said Rona Wells, OnBoard’s executive director. “Today there are nine, plus a few that are very close to that.” 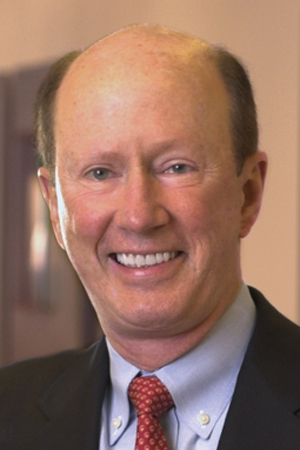 OnBoard will be honoring those nine companies and releasing its 2015 study at its annual dinner on Tuesday, Nov. 10. Hala Moddelmog, president of the Metro Atlanta Chamber and past president of Arby’s Restaurant Group, will be the keynote speaker.

Women are making some progress on the boards of major Georgia public companies, OnBoard found.

For example, on Nov. 2, Atlanta- based Popeyes Louisiana Kitchen Inc. appointed Lizanne Thomas, an executive with law firm Jones Day, to its board. Thomas oversees Jones Day’s operations in the South — including Atlanta, Dallas and Houston, and she also heads Jones Day’s global governance team.

Thomas’ appointment means that Popeyes now has three women directors, giving them 38 percent representation on the board. Popeyes also has a woman CEO, Cheryl A. Bachelder.

With this move, 10 Georgia companies have at least three women directors making up 25 percent or more of their boards.

“I think three is a magic number,” said John Brock, CEO of Coca-Cola Enterprises, which has four women directors who make up 33 percent of board members. “One you get three of a diverse group, it makes a huge difference on a board.”

Brock has been a long-time advocate of having diversity on corporate boards and in top management because he said it makes a company stronger and more responsive to its customers and other constituencies.

CCE likely will not be on the list after 2016 because the company is merging with European bottlers, and the new entity will be based in London rather than Atlanta.

But AGL, which just made the Fortune 500 list, has entered into a merger agreement with the Southern Co., so it likely will not be on the list after 2016. Interestingly, AGL has had three women directors since 2012, but it never qualified for the critical mass criteria. 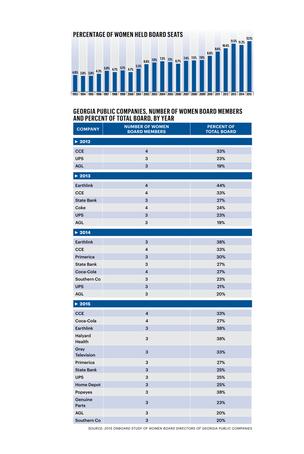 Chart of Women on Boards (Source: OnBoard)

Jackie Parker, chair of OnBoard who used to be an executive with Newell Rubbermaid Inc., said companies with a critical mass of women on their boards are becoming a “new normal” where having diverse boards is just the accepted way of doing business.

Despite that trend, most of Georgia’s public companies still have a long way to go before they reach that critical mass. Of the 128 public companies in Georgia, 44 percent (56 companies) have no women on their boards.

The good news, however, is that for the first time, OnBoard discovered that women have broken through the 12 percent barrier.

Also, women in executive suites also broke through the 12 percent ceiling for the first time in the study’s history. Women hold 12.4 percent of the 711 executive officer positions listed in Securities and Exchange Commission filings — that includes the positions of CEO, COO, CFO and others in the C-suite.

Previously, the percentage of women in executive positions ranged from 7 percent to 10.5 percent.

Wells also said there was another major breakthrough in the 2015 study. For the first time, women of color hold more than 2 percent of the board seats — the highest percentage since OnBoard started tracking this trend in 2001.

Catalyst, which tracks that percentage on a national basis, reports that the Fortune 500 companies in the United States have 3.1 percent women of color on their boards. Women of color includes African-Americans, American Indian, Alaska Native, Asian, Hispanic, Latina or Pacific Island heritage.

The biggest concern in the study, however, was what OnBoard calls the “fill rate.” That is defined by when there is a vacancy or an addition to Georgia’s public company boards, what percentage of those are held by women.

For there to be significant improvement in overall numbers of women on boards, the fill rate needs to be substantially higher than the current percentage of 12 percent of women representation.

But the study found that of the 87 percent opportunities to add a woman on the board of a Georgia public company, only 10 of those were women (11.5 percent). The number of board seats filled by a woman has never exceeded 13 in one year.

Parker, in a letter included in the 2015 study, summed it up this way: “Three is definitely not a crowd in the boardroom.”

Previous Article
U.S. Surgeon General: Walking is good for your health
Next Article
Ceiling the deal by Kelly Jordan