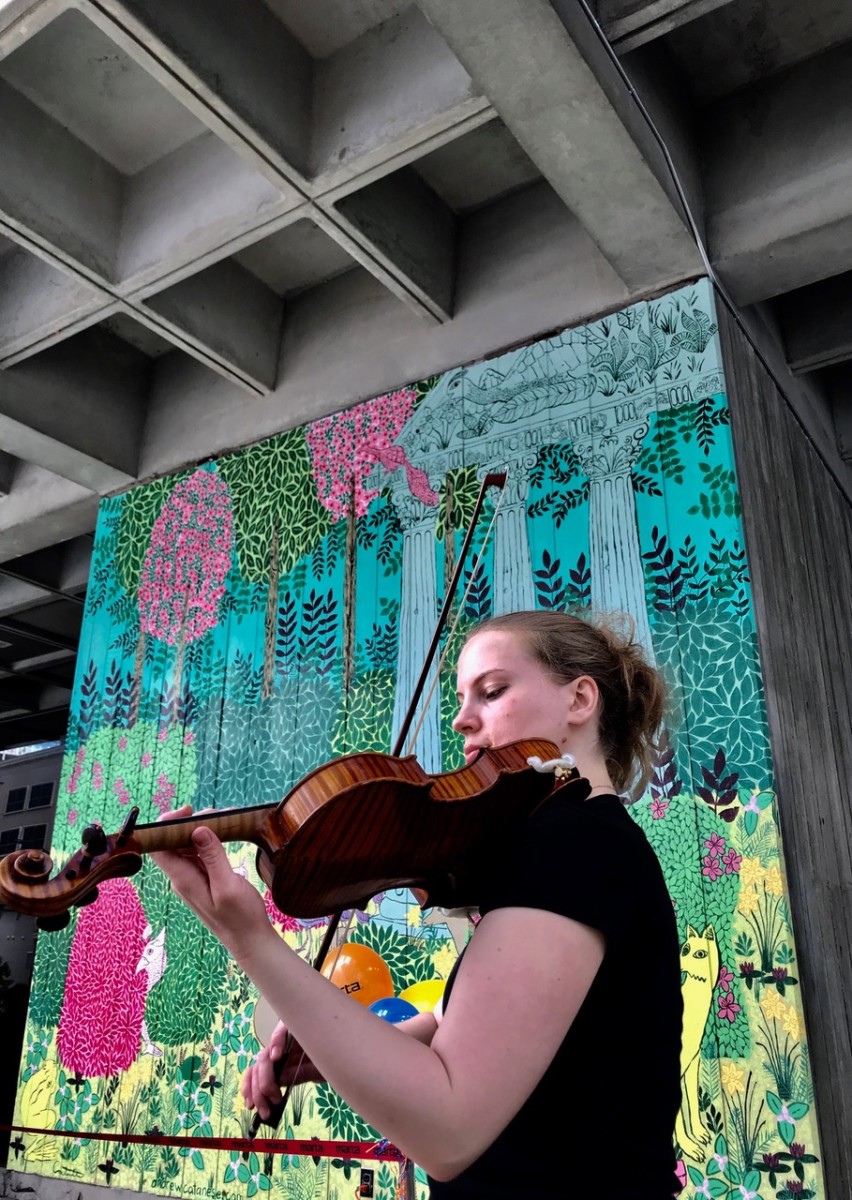 Once an ugly duckling, MARTA is getting a much-needed artistic makeover for its rail stations and other humdrum infrastructure in hopes of becoming more inviting to its customers and the community it serves.

A partnership between the transit system and the Midtown Alliance has recently transformed a dull concrete facade outside the Midtown rail station with a pastoral mural awash in lush greens, pinks, blues, reds and yellows with an assortment of forest animals peeking playfully through the foliage.

The work entitled “Confluence: Burst Forth with A Terrific Noise,” was created by Andrew Catanese, a local artist. Catanese was chosen from among nearly 50 muralists who submitted proposals for the Midtown station enhancement project at the entrance at 10th and Peachtree Place, N.E. 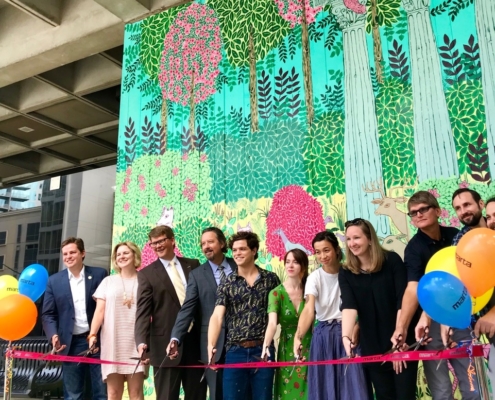 A Monday ribbon-cutting for the newly installed piece was accompanied by a violinist playing atop a small, wooden stage to be used for future performances by “buskers” who will entertain passersby outside the rail station. Domed “astro-mounds” made of synthetic turf will provide seating for audiences.

“The Midtown district, considered Atlanta’s heart of the arts, has grown significantly because of the access to MARTA bus and rail,” agency General Manager/CEO Jeff Parker said in a statement. “This partnership has created a new destination experience for the tens of thousands of riders who come through the Midtown station each week.”

The Midtown Alliance is a non-profit organization comprised of business, civic, and residential leaders that have been the driving force for Midtown Atlanta’s transformation since 1978. With the community awash in dizzying number of new construction and development projects, the organization’s Public Art & Placemaking Program has helped to further activate and energize inert spaces that might otherwise be overlooked.

“The only way that Midtown is going to continue to thrive is if we get more and more people going in and out of that entrance,” said Kevin Green, President/CEO of the Midtown Alliance, pointing to the station behind him. “Happy people on foot riding transit, that’s what it’s all about.”

The mural was the latest installment of MARTA’s “Artbound” program which was launched in 2017. The transit agency’s board of directors has committed up to one percent of MARTA’s capital budget to fund a variety of artistic and creative projects throughout the system over the next decade.

Artbound has already resulted in stunning murals created by local artist Fahamu Pecou at MARTA’s King Center and Ashby Street stations — and several more planned for other artists wishing to display their work, according to Katherine Dirga who manages the program. MARTA has teamed up with other nonprofits including Wonderroot, the Blank Foundation and the Transformation Alliance.

A portion of the Artbound funds are also being used to restore and refurbish existing artwork on the transit system that had deteriorated over the years and was badly in need of TLC.

For more information about MARTA’s Artbound program, go to  https://www.itsmarta.com/artbound.aspx.