The disaster that continues to unfold in Japan has caused people to think a little deeper about the health and safety of their families, and what protections we have in place to keep us safe from dangerous pollution.

In Georgia, air quality is still a huge problem. As a country, we depend heavily on sources of energy – coal, oil, natural gas – that put public health at risk from air pollution. For example, the Clean Air Task Force estimates 536 Georgians die early deaths every year from inhaling soot emitted from power plants.

Power plants also emit toxic pollutants like mercury and arsenic. When young children are exposed to mercury, it can interfere with their ability to learn, talk, read, and write. The problem is so bad EPA estimates that as many as one in six American women have enough mercury in their bodies to put a baby at risk.

A recent report by Environment Georgia shows that Georgia’s power plants emit over 3,800 pounds of mercury annually, over our western boarder, Alabama emits even more. Much of this mercury ends up in our waterways and fish. Georgia’s Environmental Protection Division (EPD) has placed fish consumption warning, on thousands of miles of rivers and streams, including the Chattahoochee River, and over a dozen lakes because of mercury contamination.

On March 16, the U.S. Environmental Protection Agency proposed a critical new standard to protect public health. If implemented, this new rule could mean that one day all of Georgia’s waterways are clean enough for unlimited fish consumption. It could also bring some relief to the 281,496 adults and children suffering from asthma in Atlanta’s four county region.

The proposed rule—called the Mercury and Air Toxics Rule (MATR)—is one of the strongest guardians against air pollution since passage of the Clean Air Act in 1970.

In fact, the EPA estimates that nationally this rule will:

Unfortunately, lobbyists from the coal and oil industries are already working to weaken and outright block EPA’s new rules. They’re running paid ads, spreading misinformation, and predicting that these new standards will make the lights go out and destroy the American economy.

Their tactics and stories aren’t new: throughout EPA’s history, these same industries have spent millions to block or weaken other public health standards and have stalled the regulation of toxics like mercury from power plants since they were added to the Clean Air Acts purview in 1990.

In reality, many other types of industries have been reducing mercury emissions and many other toxic air pollutants under the Clean Air Act’s MACT program. For example, municipal and medical waste incinerators have been achieving 90 percent mercury reductions since the late 1990’s using a technology called activated carbon injection (ACI) that many power plant operators also will employ to meet the proposed mercury standards.

The Mercury and Air Toxics Rule will be open to public comment soon, and the EPA has announced tentative plans to hold a hearing in Atlanta. The rule will be finalized in November 2011.

Our health is too important to delay these new pollution standards. The Clean Air Act has proven to be one of the greatest tools we have to cost-effectively protect Americans’ health and our environment. A new report by the EPA found that in 2010 alone the Clean Air Act saved 160,000 lives nationwide and that the future implementation of the Clean Air Act will lead to $2 trillion in economic benefits by 2020.

I urge you to join us in supporting this new rule–we cannot afford to wait. 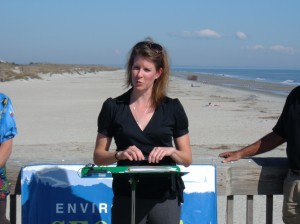