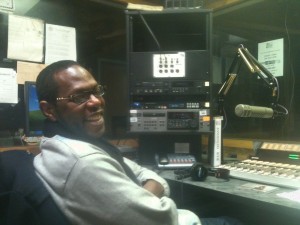 “It’s for you, because it’s wayyyyyyy bigger than me,” says WCLK 91.9 morning DJ Morris Baxter. He shares words of encouragement with his listeners, drawn from his own experience of stepping out on faith. (photo Ben Smith)

For Morris Baxter, the Great Recession hit six years before the rest of us. In 2002, he lost his six-figure salary record label job and all the perks: the prestige, the travel, the expense account, the corporate card and the national hip-hop record promotions. Bitter and negative, full of self-pity, he had to find a way to reboot his life.

What he learned on his way back now lights the way for those who listen to “Morris in the Morning” every weekday on WCLK Jazz 91.9 FM. Every morning from 6 to 10 am, Baxter uses uplifting words, motivational fables and jazz music to lead others out of the wilderness of negative thinking and defeat.

This is the “Morris Code”delivered in his silky baritone: “Something good is going to happen to me today.” That phrase and other optimistic messages target listeners in distress.

“Heaven must be a nice place because I’ve never heard nobody come back talking about it,” he quoted his grandmother one morning. He soon heard from a listener who had just lost her mom, that his words were just what she needed to hear.

“With all its sham, drudgery and broken dreams,” he recites at the start of each show, his own iTunes recording of the Desiderata poem over jazz, “it is still a beautiful world.”

His own turnaround started out of the ashes of his former success. The soundtrack to his story is jazz — the improvisational riffs that he believes inspire the brain to discover creative solutions.

A tall, lanky native of Detroit with a generous smile, Baxter was a perfect fit for his job. He traveled extensively and wined and dined and entertained radio station executives at five-star restaurants, resorts, spas and even strip bars. He had earlier worked at several radio stations in Virginia and Washington, D.C., and the airwaves were his first love.

“It was fast-paced. But also stressful,” said Baxter. “There was a lot of pressure to get the records played at the record stations. That would result in revenue for the record company —and every record wasn’t a hit.”

Getting laid off was a hard fall. Baxter said he was out of work for nearly a year stuck in self-pity, negativity and depression. “I wasn’t a nice person back then,” he recalled. “I had nothing going.” 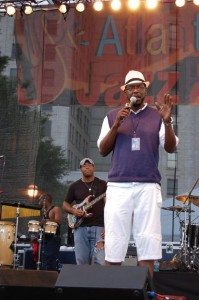 Morris Baxter on stage at the 2008 Atlanta Jazz Festival.

Two events helped lift him out and give him the energy to reinvent himself.

His wife, Erin, became pregnant. Her income as a senior project manager for the Grammy Awards wouldn’t stretch to cover the three of them. They needed Baxter’s financial support. He needed to find a way.

Erin also persuaded her husband to watch the self-help film, “The Secret,” which claims that positive thinking can bring about wealth, happiness and prosperity.

An idea promoted by the film—“anything you put out in the universe, whether positive or negative, will come back to you”—made a great a deal of sense to Baxter.

“I had an epiphany one morning I needed to enjoy being alive and in order to do that I had to have a grateful attitude,” said Baxter. “I developed that thinking and put it out in the universe. Then what I had thought came to be.”

Recovery didn’t happen all at once. Like progressive and contemporary jazz, his journey was guided by “the spark of creativity.”

Baxter had to improvise by first accepting work that didn’t fit him that well, as a mortgage loan officer, then take a leap of faith when he saw an opening that was better.

“I used to come home every day and complain about the job,” he said of working in finance. “I equated that job with working in a boiler room.” He hated it, but at least he was providing for his family.

In 2005, Baxter was doing a weekend radio show for the Atlanta Hawks when WCLK general manager Wendy Williams heard him and offered him a tryout for a job at the publicly funded radio station on the Clark Atlanta University campus.

Before the offer came, he had already quit his loan officer job. “I just had that feeling,” Baxter said. “All things good.”

In the radio booth, he quickly discovered a need among his listeners, for someone to help spur them on just as his wife had done for him. “Early on I started getting calls from people who really, really needed to be pumped up,” he said. “I found that my niche was helping other people get motivated.”

He’s been spreading that good feeling over the air and in community appearances for eight years now, as the economy has tanked and more people than ever need encouragement. His material comes from his life, fables he finds on the Internet or writings by self-help authors.

One is Dennis Kimbro, the self-help guru of African-American entrepreneurship; another is Malcolm Gladwell, who in “Outliers” pinpoints the traits of on unusually successful people. Referring to a term coined by Atlanta author Jon Gordon in the bestseller “The Energy Bus,” Baxter warns his audience to protect their dreams and goals from “energy vampires.”

His message fits his mellow, layered playlist featuring artists such as John Coltrane, David Sanborn and Lalah Hathaway. The show sometimes veers into other forms of jazz-influenced music such as Steely Dan. 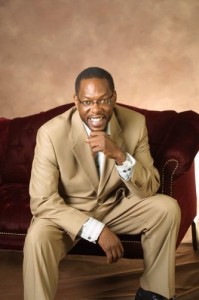 Morris Baxter went from a dream job working for a record company to unemployment, then to mixing jazz and motivational messages every weekday morning at WCLK 90.1 (Credit WCLK)

He weaves these anecdotes into “Morris Motivations,” which commuters (and carpoolers like me and my teenaged daughter) look forward to each morning. The stories have catchy titles like “The Wheel of Fortune.”

“Surely one of the saddest creatures around is the one labeled the prisoner of hope,” he noted in a recent Motivation.

“The prisoner of hope hopes that someday while walking down the street he will see bags of money that will contain his life’s fortune … He’s the kind of person who goes to see if his ship is coming in when in reality he knows that it has never left the port.”

What the prisoner of hope hasn’t discovered, Baxter concludes, is “that if you really want to find a helping hand you should look at the end of your own sleeve.”

Remaining positive all the time is his personal challenge, and he has to draw upon his own advice. “Positive people need more positivity than anyone,” he noted.

“If you wake up on the wrong side of the bed, get back in and get up on the other side,” is one thing he tells himself.

The “competition” is the doubter standing in the way of one’s own success.

He closes his four-hour slot with the same advice: “Worry about nothing. Pray about anything. Thank the Creator for everything and become an energy vampire slayer.

To some listeners, his “Motivations” might sound trite or obvious; for Baxter, these truths are fresh because he has made them his own. He discovered his closing slogan in a throwaway remark made by college football coach Lou Holtz. It sums up Baxter’s purpose of informing and enlightening listeners who feel alone and doubting.

“That’s your motivation,” Baxter says as he signs off each day. “It’s for you, because it’s wayyyyyyy bigger than me.”

Previous Article
UNICEF — 19,000 children die each day; asks for Atlantans to help
Next Article
It’s Time to Act on the Housing Market’s Opportunities