Mortgage debt continues to rise among the nation’s homeowners age 65-plus. More than a quarter of the 80-plus crowd now has mortgage debt, according to findings by the Federal Reserve and Harvard University. 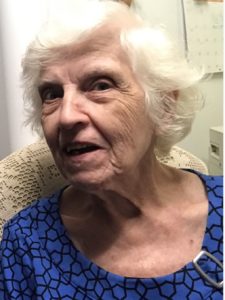 Ida Mae Kepler lived alone in her home until she died, age 94. The widow of a minister, Kepler’s children tended to her in her later years. Credit: David Pendered

In metro Atlanta, the Atlanta Regional Commission has found that older residents face a wide array of housing challenges that include cost burdens.

These reports continue the alarm sounded by the Fed in 2013, when it warned that the loss in homeowner equity caused by the Great Recession of 2007 had major implications for the elderly. The 2013 report cautioned of “a significant reduction in, or even elimination of, some adults’ housing wealth that was previously available to help fund retirement or other expenses.”

In metro Atlanta, these debt levels could become a policy challenge for the region given the fast growth rate expected in the aged population – almost doubling from 11 percent to 20 percent by 2040, to 1.2 million older residents, according to an ARC forecast released in 2019. The ARC continues to present strategies for addressing the challenges facing seniors, including a five-year framework plan released Sept. 23, 2020 that addresses disparities in life expectancy in local neighborhoods, Live Beyond Expectations.

The national numbers on mortgage debt held by the elderly are stunning.

They show that seniors have not paid down mortgage debt, and actually have accrued an increasing amount of mortgage-backed debt, since the years leading to recessions in 1990 and 2001. 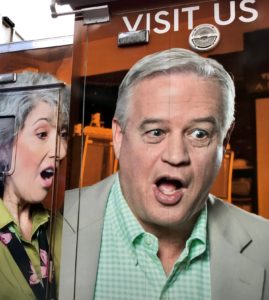 Communities for adults age 55-plus have proliferated in metro Atlanta as the region’s population has grayed and their resources covered entrance costs and fees. This development was advertised at the 2018 Atlanta Jazz Festival. Credit: Kelly Jordan

The Federal Reserve reported in September 2020 that the median mortgage debt in 2019 among homeowners aged 65 years to 74 years was at the highest level since the year the chart begins, in 1989. The chart shows the following mortgage debt levels for borrowers ages 65-74 years:

The Joint Center for Housing Studies of Harvard University adds to the human face of the situation. A rising proportion of 65-plus homeowners have taken on mortgage-backed debt, according to the State of the Nation’s Housing, 2020 report, issued in November 2020. A snapshot from this report shows:

The Fed’s report, Survey of Consumer Finances, shows the following about the rising level of mortgage-backed debt carried by homeowners 75 years and older:

The level of mortgage debt carried by homeowners age 65-plus has increased at a steady rate since the recession of 1990. Credit: federalreserve.gov

The Atlanta Regional Commission identified aspects of the challenge related to mortgage debt among older homeowners, and proposed a number of solutions, in its latest policy statement on senior housing, issued in January 2019. The ARC is the region’s Area Agency on Aging, an entity required by the 1973 revisions to the Older Americans Act. The challenge identified by the ARC observes:

The solutions identified by the ARC include four at the state level and three at the city/county level. The solutions are cited under a statement that observes:

Previous Article
Georgia legislative roundtable talks: What should you expect in 2021?
Next Article
A chance to chill