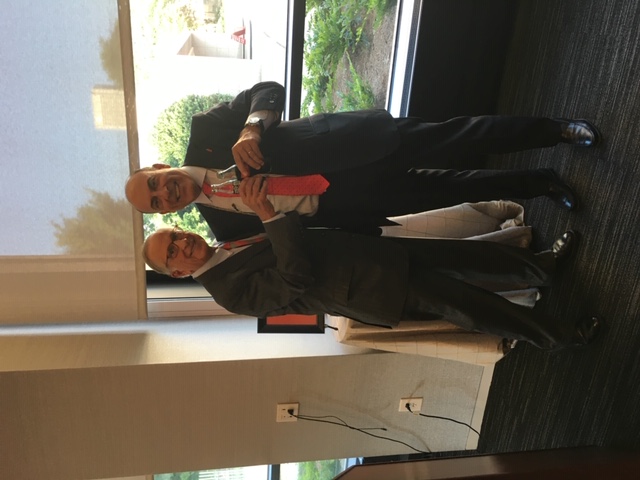 This photo was taken July 20, 2016, during a board dinner at Coca-Cola headquarters in Atlanta. Sam Nunn is on the left and Muhtar Kent is on the right (Special: Coca-Cola Co.)
Share
Tweet
Share
Pin
Pocket
WhatsApp
Buffer
Email
Reddit
0 Shares

Another chapter in the history of The Coca-Cola Co. is coming to a close.

Muhtar Kent, the company’s executive chairman and former CEO; and former Sen. Sam Nunn (D-Georgia), the company’s lead director for the past five years, will part ways with Coca-Cola (NYSE: KO) at its upcoming annual meeting in April – marking the beginning of another chapter in leadership.

“That wasn’t a coincidence,” Nunn said in an interview Dec. 10. The moves will allow Coca-Cola CEO James Quincey to solidify his leadership position – becoming the company’s chairman in April. And it puts in place a new leadership team both within the company’s executive ranks and on the board.

Brian Smith will become president and chief operating officer on Jan. 1; and Maria Elena “Mel” Lagomasino will succeed Nunn as the lead director in April. 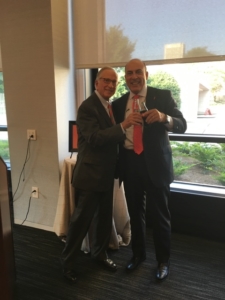 Then he declared it as “the best transition” in the company’s history.

“It was planned, programmed and then executed,” Kent said. “It takes a lot of planning and hard work to mentor the right person…. I am delighted with how well James and the leadership team are doing. It’s the right time.”

Over the years, Coca-Cola has experienced rocky leadership transitions. After long-time CEO Roberto Goizueta died in October 1997, the company hit a few bumps during the tenure of Douglas Ivester (1997 to 2000) and Douglas Daft (2000 to 2004). Then Neville Isdell came out of retirement to serve as CEO from 2004 to 2008 before turning over the leadership to Kent.

“We have had two seamless transitions – from Neville to Muhtar, and now from Muhtar to James,” Nunn said. And that too wasn’t an accident.

Both Kent and Nunn said the company has become more focused on leadership and governance – creating an overlap in tenure to ensure a smoother transition. Kent retired as CEO in 2017, but he remained chairman. That paralleled the transition from Isdell to Kent a decade earlier.

The fact that there now will be a leadership team between Quincey and Smith also is reminiscent of another leadership team – the one between Goizueta and then-President Donald R. Keough – often viewed as the company’s glory days.

“You need a team,” Nunn said. “It’s too big a job for one person. The ceremonial part of the job is huge.”

The role of women at the company also has grown. Kent said that 35 percent of the company’s senior leadership team are women. There also are five women directors on the board, and Lagomasino is the first woman to serve as the company’s lead director.

“Muhtar should get a lot of credit for that,” Nunn said. “Muhtar was really big on having women in leadership.”

Nunn said Kent also should get credit for transforming the bottling system, a major investment that may have hurt the company’s share price in the short-run but is invaluable long-term.

“We overhauled the bottling system” through extensive re-franchising, Kent said, adding the goal is long-term value creation. “I have often said that we don’t only manage the business of the Coca-Cola for the next quarter, but for the next quarter century.”

The company has had its fair share of challenges during Kent’s tenure. It has faced ongoing scrutiny about the lack of nutritional value of its core brands and how that has contributed to the nation’s growing obesity problem.

“We have got headwinds,” Nunn said. “Sugar certainly is a headwind. Plastic waste is a headwind. I think we are addressing these issues in a positive way. James does not believe in putting his head in the sand.”

The company also has been diversifying its product offerings with more beverages with little to no sugar, more sparkling waters and juices as well as teas.

Kent said the number of products marketed by the company expanded from about 2,800 in 2007 to more than 4,100 today. Today the company also has 21 billion-dollar brands – twice as many as it had a decade ago.

In the past several years, there’s been speculation that Coca-Cola could be a takeover target – especially when its stock price hit a low of $37 a share in February 2014. It now is nearly $50 a share. Observers also have said the company’s relationship with its bottlers helps protect it from being acquired.

Kent said he couldn’t comment on such speculation. But Nunn said he has no immediate concerns.

“The Coca-Cola Company will be an independent company for years to come, but vigilance is important,” Nunn said. “You should never take Coca-Cola or any other major Atlanta company for granted, but I think it’s very solid. It’s a great city for the headquarters.”

The relationship between Coca-Cola and Atlanta goes back 132 years.

“We will continue that symbiotic relationship,” Kent said. “That’s going to continue unabatedly.” But he did acknowledge the relationship has changed as the company has become more global – now operating in more than 200 countries.

With Nunn stepping down from the board, there is now only one Atlantan who is an outside director – Ron Allen, retired CEO of Delta Air Lines.

“I think we always ought to have repre- sentation from Atlanta and Georgia on the board,” said Nunn, who has loved serving on the board of the hometown company since April 1997. At Goizueta’s invitation, Nunn joined the board in April 1997, and Goizueta died six months later.

The role of the CEO also has become more global. Quincey’s family still is based in England, and while he has a residence in Atlanta, a Coca-Cola’s CEO probably spends more time in an airplane than in any one place.

Kent, who made Florida his primary residence in 2017 but maintains a home in Atlanta, said he traveled more than 130 days a year during his tenure as CEO.

Looking forward, Kent, 66, and Nunn, 80, will continue to remain active.

Kent will be able to spend more time harvesting olive oil in Turkey (“more a hobby than a commercial business”), working on nonprofit boards – including Emory University’s board of trustees, serving on the board of 3M and overseeing his foundation, which awards four annual scholarships.

Nunn continues to co-chair the Nuclear Threat Initiative alongside Ted Turner and Ernie Moniz, who succeeded him as CEO. Nunn also will continue to be involved with Georgia Tech’s Sam Nunn School of International Affairs, and he continues to be associated with King & Spalding as a retired partner.

They both will continue to root for Coca-Cola – even though they no longer will be on the board.

Kent called both Quincey and Brian Smith “amazing” leaders who should be viewed as a “great team” who will help the company grow and prosper. Kent then added, “I firmly believe the best years of The Coca-Cola Co. are ahead.”

Previous Article
How Hartsfield-Jackson’s manager is piloting the world’s busiest airport
Next Article
Behind the Deal: State Bank & Trust’s merger with Cadence Bank