A scene from the new documentary: "Natalie Wood: What Remains Behind"

So much has happened this past weekend that writing about a Natalie Wood documentary seems a bit beside the point.

I was so thrilled by – so proud of – the actions of Mayor Keisha Lance Bottoms, Police Chief Erika Shields, T.I., Killer Mike, City Council President Felicia Moore, Ambassador Andrew Young, Dr. Bernice King, just to throw out a few names I saw or heard. And there were the heroic police officers and firefighters, too many to even begin to name.

‘This is a sacred city. This is Wakanda,” said T.I.

“I can’t be out there to protect you. Go home,” Mayor Bottoms said.

Maybe a movie like “Natalie Wood: What Remains Behind.” 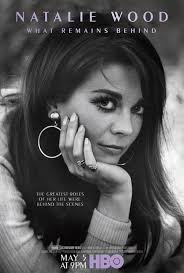 Poster of the documentary “Natalie Wood: What Remains Behind”

For those not immediately familiar with Wood – she died 40 years ago – she was a gorgeous, talented, bonafide movie star. She played opposite Steve McQueen in “Love with the Proper Stranger.” Warren Beatty in “Splendor in the Grass.” Robert Redford in “Inside Daisy Clover.” James Dean in “Rebel Without a Cause.” Tony Curtis in “Sex and the Single Girl.” Rosalind Russell in “Gypsy.” And she was the once and forever Maria in “West Side Story.”

Wood died tragically – and young, age 43 – when she drowned at sea over Thanksgiving weekend in 1981. She, her husband Robert Wagner, and Christopher Walken, her co-star in her new movie, “Brainstorm,” had taken Wagner’s boat, the Splendour and sailed to Catalina.

While there has been much prurient speculation as to what exactly happened, the bottom line was, Wood’s dead body was pulled from the water. Walken, who is not interviewed in the film, probably came as close as anyone could when, after being hounded for comment on Entertainment Tonight, he simply said, “The real story of her death is that she drowned.”

What’s appealing about the documentary is that it’s about Wood’s life, not her death. That’s probably because it is such a family affair. Wagner – or R.J. or Daddy Wagner as he is more often known – gets the most screen time and the last word.

Often the one who’s interviewing him is his stepdaughter, Natasha (by Natalie’s second husband, Richard Gregson, who also appears)

There’s Courtney Wagner, the child R.J. and Natalie had when they married for a second time. And Katie, the child Wagner had with his second wife.  And some assorted Donen kids (as in Stanley and “Singin’ in the Rain” Donen).  Everybody seems to genuinely care about everyone else.

With one exception: Natalie’s less-talented, envious younger sister, Lana, who liked to talk to the tabloids about what happened on the Splendour (even though she wasn’t there).

Anyway, the better segments are the ones about Wood’s career, which began when she was five.  She was born Natalia Nikolaevna Zakharenko, but Hollywood soon took care of that. Natalia became Natalie and an early director decided to borrow the last name of another director, Sam Wood, to complete the rechristening.

From her earliest roles, she’s very good – as convincing as the little girl who won’t believe in Santa Claus in “Miracle on 34thStreet” as she is as a would-be swinger in “Bob & Carol & Ted & Alice.” By the time she was 25, she’d been nominated for three Oscars.

But as the film shows, there were tough times, too, long before the Splendour’s fateful voyage. Her mother was a Stage Mother Nightmare. If Natalie lost a role, she would hiss at her: “Well, no new shoes for your little sister.” 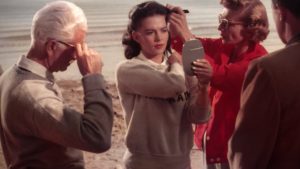 A scene from the new documentary: “Natalie Wood: What Remains Behind”

No wonder, perhaps, that Wood had an affair with her “Rebel” director, Nick Ray. She was a teenager; he was in his 40s.

When she made “The Great Race” with Tony Curtis and Jack Lemmon, she was enraged to discover that she was being paid less than her co-stars. Before she continued working, she insisted everything be equal, right down to the length of the three stars’ telephone cords.

And then she got old, i.e., 40, and the roles became harder to find. But not impossible; she was working right up to the time of her death.

“Natalie Wood” allows us to take another look at this woman, at what she did and who she was, not just how she died. And it makes us hungry to see more of her, to see what sort of memorable performances she might have given us in her 50s and 60s and beyond.

Not a bad epitaph, as these things go.

“Natalie Wood: What Remains Behind” is a newly-released HBO documentary that is available on HBO-Go; Amazon Prime Video and Hulu.