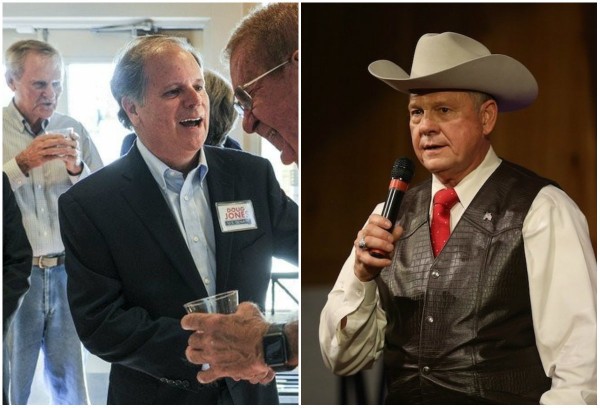 “And who be Puritans, that I, an Alabamian, must do them reverence? A set of sourly conceited old Malvolios, whom Shakespeare laughs his fill at in his comedies.”
From “The Confidence Man,” by Herman Melville, 1857

One night at a New York dinner party in the 1920s, someone made a remark about rape and Tallulah Bankhead, a rising star and daughter of a congressman who would later be Speaker of the U.S. House, volunteered that she had been raped in the driveway of her parent’s home in Alabama when she was 11 years old.

“You know, darlings,” the whiskey-voiced actress said, “it was a terrible experience because we had all that gravel.”

We can only imagine how far jaws dropped around the table that night, but they could not have gone much farther than they have in the concluding weeks of the U.S. Senate campaign in Alabama, as stories that Republican Roy Moore molested teenaged girls when he was a prosecutor in his 30s have dominated the race, with charges and counter-charges flying almost daily. Astonishing as this race may be to some, there really is nothing new about it.

The race has produced several deep wallows on the subject of its Alabama-ness, in the various, mostly disparaging ways that is defined. Nothing that has been written has captured as succinctly as Melville did, 160 years ago, the intense resistance to moral judgments imposed from outside, especially from “Puritans.” This can be true even when, as is the case with Moore, the same Alabamians would impose their own moral judgments on others.

There’s a country saying in Alabama: “He’d fight a circle saw.” It’s generally said in a way that is both reproving and admiring.

This describes an Alabama quality which cuts across race, politics and football allegiance. Rep. John Lewis remains, in some deep core of himself, an Alabamian. He’d fight a circle saw. This is the quality Sen. Richard Shelby showed when he denounced Moore, not while the tide appeared to be running against the Republican candidate, but over the past weekend, after President Trump had placed a solid bet on Moore and the Republican National Committee had decided to dump a few million into the race.

On the other side, it’s a quality Moore’s supporters see in their candidate and themselves. They see themselves fighting the circle saw of media culture. The 21st Century version of a Puritan could be described as someone who loves Woody Allen movies but is repulsed by Roy Moore.

Not every Alabamian shares this impulse toward cussedness. Turnout Tuesday is expected to be only in the mid-twenties. A majority of Alabamians appear to be uninterested in or embarrassed by this race, so closely watched around the country.

In a normal election year, Alabama goes yard sign and road sign crazy — you notice the difference almost as soon as you cross the state line. My only visit to the state during this campaign was a one-day trip to Auburn to tailgate with family before the Alabama-Auburn game. I wasn’t in full reporter mode, but the only signs I saw all day were a covey of Moore signs, obviously put up by his campaign, at the interstate exit, and a single Jones sign in an upscale Auburn neighborhood. That wasn’t normal.

It has already been decided in punditry that the Democrats win, no matter what happens Tuesday, because Moore is such a stinkbug for the Republicans. This isn’t true. The Democrats don’t need any more stepping stones to the moral high ground. They need more real expressions of power at the ballot box.

Sure, a number of Senate Republicans — even Shelby now — have expressed distaste for Moore, and when they have more first-hand experience they may very well be expressing some more. Despite the barking, that’s highly unlikely to lead even close to Moore’s removal from the Senate.

Speaking of Corker, former Tennessee Gov. Phil Bredesen has entered the race to fill Corker’s seat, giving the Democrats their most high-profile contender thus far in the Trump era. Let’s see what they can do with that one.

Previous Article
MARTA SAVES MILLIONS DURING BOND REFUNDING
Next Article
Taxing condo owners in Buckhead to pay for a planned park to be built above Ga. 400?