By Maria Saporta
Published in the Atlanta Business Chronicle on July 3, 2015

The developer of the re-envisioned Underground Atlanta says the total investment in the project likely will be between $350 million and $400 million.

That’s about double previous estimates that have been announced for the Underground Atlanta redevelopment project.

Scott Smith, president and CEO of WRS Inc., a real estate company based in Mount Pleasant, S.C., provided an update of the project in a telephone interview on June 29.

The firm also released the latest rendering, a conceptual drawing that shows how Underground Atlanta would be developed along Upper Alabama Street looking towards the Five Points MARTA station.

Smith still anticipates closing the $25.75 million purchase of 12 acres of land that encompasses Underground from the city of Atlanta by the end of the summer.

When the deal was announced last December, Smith said he expected the total investment would be “somewhere between $150 million and $200 million at full build-out.”

WRS has just completed engineering work on the site to figure out where to locate the high-rise buildings.

“We now know where all the pads will go,” Smith said about the number of residential towers and other structures that will be developed on the property. “We expect to have retail on the bottom and multi-family on top. And we’ve already had inquiries from the technology space.” 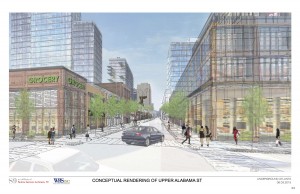 WRS will act as the master developer and it will work with others — such as residential developers — to build out specific elements of the project.

“We think the overall project will exceed $300 million,” Smith said. “We believe the total investment will be between $350 million and $400 million.”

Asked about the timing of when construction would begin and when the development would be built out, Smith said that he expects that 2015 and 2016 will be spent on the planning and design of the various components of the project.

“We expect to start construction by early 2017,” Smith said. “I think we will be developed out completely in four to five years.”

Smith also said Underground will seek to serve nearby residents as well as out-of-town residents by offering a special venue to enjoy the sights and sounds of the city. “We want to preserve the area inside Underground and take it back to where it used to be with a unique character of days gone by,” Smith said. “We envision art galleries, restaurants, entertainment venues and one-of-a-kind type shops. It won’t be your Mall of America-type shopping.”

Several issues, however, are still fluid. The rendering shows that Upper Alabama will be open to cars. Currently it is mostly a pedestrian-only street. Smith said the development team is still working on the best solution for how to incorporate parking to serve the grocery store, the other retail outlets and the residential towers.

They also are working on various designs on the orientation of the plaza and the grand entrance to Underground. WRS is close to hiring an architectural firm to serve as the master architect to oversee all design aspects of the project. The different development partners, however, are expected to select their own architects for their buildings.

A.J. Robinson, president of Central Atlanta Progress, has been working with WRS throughout the firm’s planning process. “We are extremely encouraged by the work that WRS is doing,” Robinson said. “They are making great progress. And they are studying not only the property itself and what can be achieved, but also what is going on around all of downtown where a lot of change is taking place.”

Given the ups and downs of Underground Atlanta over the years, Robinson has long felt it needed a major investment to transform the way it is viewed by people in the city and region.

“The concept of creating a new neighborhood called Underground is absolutely the right strategy,” Robinson said. “It’s about place-making and the right development for today’s market.”

Robinson compared it to two developments that have enjoyed recent success: Ponce City Market and Krog Street Market. “Underground could be the grand-daddy of them all because of its unique bones and its unique history,” Robinson said about Underground’s proximity to Atlanta’s zero milepost on the railroad where the city was founded.

“I’m encouraged by the renderings that we have seen and the work that WRS is doing to create a unique area above Underground,” Robinson continued. “It will make it very different than the place it is today.”