The newly formed Atlanta Aerotropolis Alliance bears a striking resemblance to Partnership Gwinnett, a public-private initiative that has created a strong record of economic development in Gwinnett County. 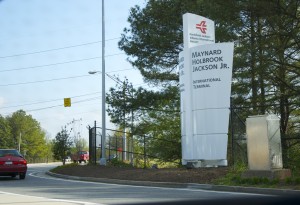 Each entity was formed to attract jobs and investments to their respective areas. One distinguishing point is that the aerotropolis alliance was convened by the Atlanta Regional Commission, whereas Partnership Gwinnett is based at the Gwinnett Chamber of Commerce.

The purpose of the new alliance is to make it easier for companies to locate near Hartsfield Jackson Atlanta International Airport. The high level of support behind the group separates this effort from past ones over past decades, all of which sank under an amazing array of political and bureaucratic structures that are amassed in a relatively small area: 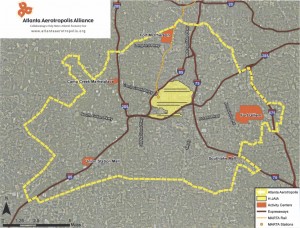 The proposed boundaries of the Atlanta Aerotropolis Alliance are expected to change as civic leaders in additional areas seek membership. Credit: ARC

Joe Folz said he knows first hand how difficult it is to open a facility near the airport.

Folz said he thought, at times, that the only reason anyone returned calls concerning a proposed headquarters near the airport was because of the company that wanted to move there – Porsche Cars North America.

Folz is the company’s general counsel and helped arrange Porche’s move from Dunwoody to the site of the old Ford plant in Hapeville. Folz will serve as the inaugural chairman of the alliance that was formally launched at a March 28 event hosted at the airport.

“We found we were able to break down a lot of walls,” Folz said. “We have no illusions that might have been because we’re Porsche. People take Porsche’s calls. We want to make it as easy for every business to join us here as we found it to be.”

The Gwinnett Partnership has been credited with making Gwinnett an easier place to locate a facility. 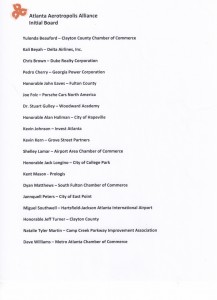 The initial board of the Atlanta Aerotropolis Alliance includes these members. Credit: ARC

For example, solar-cell manufacturer Suniva chose Gwinnett as the site of its first solar cell factory after it raised start-up funding to produce a technology developed at Georgia Tech. The company has survived the solar industry’s travails and, in January, announced a 1.1 MW order for Mexico’s largest solar project to date.

Suniva CFO James Modak praised Gwinnett Partnership in a statement contained in the partnership’s 2008 annual report. It was issued shortly after the company sited its plant near Norcross:

The ARC has been working since at least mid 2012 to foster an entity such as the one now named Atlanta Aerotropolis Alliance.

First, the ARC convened the Airport Area Task Force. The group met several times to discuss a vision statement for the airport area that had the backing of local governments, chambers of commerce, businesses and other interested parties – such as Georgia Power.

Along the way, the ARC and/or task force seized upon an airport development concept devised by John Kasarda, who head’s the University of North Carolina’s Center for Air Commerce. The concept is a familiar one in U.S. history, but an airport replaces a seaport or railroad depot as the center of a bustling community.

Previous Article
Political alienation bubbles up in Senate race, to Perdue’s advantage
Next Article
An artist’s walk through the valley of censorship