During a typical school day, most kids spend their time inside and under fluorescent lighting. But, just 12 miles west of downtown Atlanta, a new kind of school is in the works — one that spotlights STEM and uses the natural world as a learning aide.

The school’s unique placement will allow students to get away from the bustle of the city, and provide them a place to explore and the opportunity to use the natural environment as a classroom.

This isn’t the Academy’s first foray into alternative learning arrangements. Amana already has a 700-student charter school in Alpharetta, which opened its doors in 2005. The Amana Academy team searched for a second location for quite some time, when Executive Director Ehab Jaleel had an “aha-moment,” realizing the Girl Scouts’ camp would be the right fit.

Amana follows the Harvard-based EL Education model, which emphasizes critical thinking and active engagement from students, and the Camp’s natural landscape complements the Academy’s teaching style, according to Jaleel.

“[The campus] is going to allow for the full expression of the model because the EL model is all about academics and so forth, but it’s also about adventure,” Jaleel said. “It’s about connecting to the natural world; it’s about pushing yourself outside of your comfort zone. And that camp is a lab. It’s this huge 270-acre lab for our stem programming.” 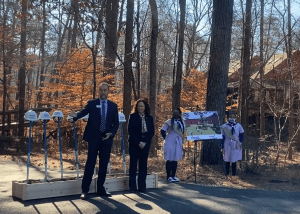 This partnership makes a lot of sense for the Girl Scouts team, too. Camp Timber Ridge is jam-packed with Girl Scouts during the summer and some weekends, but the space is rarely used throughout the year.

Although Amy Dosik, CEO of Girl Scouts of Greater Atlanta, had been approached several times by other schools, it didn’t feel like the right partnership. But Amana’s emphasis on STEM, the natural environment and student empowerment aligns with the Girl Scouts’ vision of “creating girls of courage, confidence and character who make the world a better place,” according to Dosik.

“If you map the STEM ecosystem in and around Atlanta, there are no STEM resources [for kids] on the westside of Atlanta, or in South Cobb, or in South Fulton,” she said. “Talent is equally distributed, but opportunity is not. [The Academy] is also going to create different kinds of opportunity and social capital.”

Jaleel added: “These kids in West Atlanta that live 10 to 15 minutes away from Georgia Tech never make it to Georgia Tech. So we think there’s a huge opportunity to inspire these young people and prepare them for the new economy and the fields that are going to propel the new economy.”

Classes will be held in four cabin-style buildings, and school will be in session this fall for kindergarten through third graders. The team broke ground on the project on Jan. 26. The Academy plans to accept roughly 220 students this year, adding the next-oldest grade until their curriculum covers eighth grade.

The curriculum will include fieldwork, where the students can take water samples from the lake or help remove invasive species from the woods. 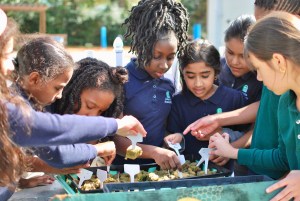 After a tumultuous two years of the pandemic, some parents are reconsidering the type of education program that works best for their kids. In the past year, the Academy had three times the number of applicants as the year before.

“What we’re seeing is, people want something different,” Jaleel said. “[During a campus tour,] we heard over and over again, ‘This is exactly what my kid needs. I want a different approach to learning, I want an approach that values the natural world, and I don’t want him or her in front of a computer all day long.’”

And once school is in session at Amana Academy West, Jaleel and Dosik hope that every girl will join a Girl Scouts troop.

Previous Article
Rivian plant criticized for risks to environment, culture as market setbacks arise
Next Article
Out with the old, in with the new…again