A new commissioner took charge Thursday of the state department that oversees a number of programs that influence local planning and economic development. 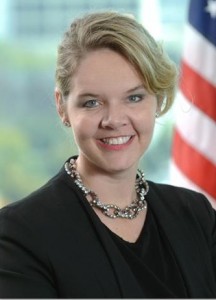 Gretchen Corbin replaces Mike Beatty as commissioner for the Department of Community Affairs. Corbin served most recently in the state’s Department of Economic Development – where she worked on teams that convinced Caterpillar and Baxter International to open manufacturing facilities in Georgia. Beatty will lead a non-profit organization engaged in workforce development.

DCA’s most recent work in Atlanta was to create an Opportunity Zone in sections of the Cleveland Avenue/Metropolitan Parkway area. The designation aims to spur businesses to hire by providing a tax credit for each job created, provided that at least two jobs are created.

“Opportunity Zones give existing businesses the incentive to expand and motivate entrepreneurs to create new ventures,” Atlanta Mayor Kasim Reed said in a July 22 statement announcing the designation. “These zones lead to job creation and neighborhood revitalization and have a direct positive impact on our overall economic competitiveness.”

Reed serves on the board of the Great Promise Partnership.

Gov. Nathan Deal announced Corbin’s appointment June 20, in a routine announcement of leadership changes in state government. The release from the governor’s office that describes Corbin hit the highlights of her achievements, but did not provide the level of detail that portrays her success in promoting economic development in Georgia that was outlined in her profile on the state’s website.

According to the release from Deal’s office:

A more complete description of Corbin’s achievements are provided in her biographical statement on the website of the Department of Economic Development, including her role in helping to open Georgia’s trade office in China and the trade alliance that links Canada with six southeastern states. A snippet of the bio states: