New facilities, programs, focus on growing number of metro Atlantans who say: “I remember when”

Efforts to prepare for the region’s graying population are beginning to gain traction.

In Cobb County on Monday, a sold-out crowd is booked for the daylong “Aging by Design” summit. The event culminates the county’s two-month program on aging.

Gwinnett County’s Senior Service Center was designed as an 8,000 square foot facility with the capacity to add a 12,000 square foot kitchen. The kitchen was opened in April. Credit: pondoco.com

In Gwinnet County, a new commercial kitchen opened officially April 22 at the Gwinnett Senior Services Center, in Lawrenceville. The facility triples the number of meals that can be prepared and delivered to seniors, to 2,000 meals a day.

Across the region, the Atlanta Regional Commission is increasing public awareness of aging through its, “Living Beyond Expectations” campaign. In June, two blocks along Auburn Avenue in downtown Atlanta will be converted to a “Lifelong Community” to provide visitors a sense of a place that facilitates aging in place.

Taken collectively, the seminar in Cobb, kitchen in Gwinnett, and ARC’s efforts, represent a significant acknowledgement of a significant demographic shift that is on track to unfold over the next 15 years in metro Atlanta.

The ARC has reported some figures that remain astounding in the wake of the recession, an era when the consumer and jobs markets seem to have shifted strongly in favor the young: 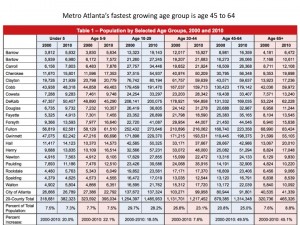 Click on the image to see a larger version. Credit: ARC

Cobb County commission Chairman Tim Lee invited his colleagues on the ARC board to attend the event. The response was minimal, even after Lee said more than once that the event was sold out – a clear indication that one of Atlanta’s first bedroom communities is on the brink of a watershed transformation to include a significant number of older residents.

The Gwinnett kitchen was built with a $2.6 million federal grant and fulfills a promise Gwinnett County commission Chairman Charlotte Nash made in her 2013 State of the County address. Atlanta-based Pond Co. designed the original facility so that the kitchen could be added.

“The driving force behind this project was to establish a one-stop shop where seniors, their families and their caregivers can connect with various resources in the community,” Nash said in a statement released after the ribbon cutting ceremony. “It is playing that role very effectively today.”

Meals prepared in the new 12,000-square-foot kitchen will be delivered to the county’s four senior centers. A home-delivery program will provide meals to homebound seniors.

“This new state-of-the-art commercial kitchen will enable us to offer meals to more seniors and their caregivers,” Gwinnett Senior Services Manager Jamie Cramer said in a statement. “It will also provide us the opportunity to generate revenue to help reduce the number of older adults that are currently on our waiting list for senior meals.”