Atlanta could be at the center of a new southern network of passenger high-speed rail service that a consultant to the state Transportation Department has said is feasible and could begin operating no sooner than 2028.

The report does not address the sobering question of how to pay for the potential network, which would link Atlanta with four southern cities: Birmingham, Ala.; Louisville, Ky.; Savannah; and Jacksonville, Fla. 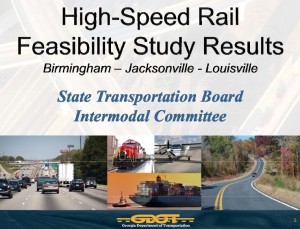 A new report from a GDOT consultant determines that high speed passenger rail service is feasible, and could link Atlanta with four southern cities. Credit: GDOT

The new report reaches some of the same general conclusions of a freight logistics report GDOT released earlier this year: Georgia’s rail system has not kept pace in providing upgrades needed to serve its growing logistic industries and population.

Click here to read the new report on the feasibility of high-speed rail service.

Click here to read the previous report on recommended improvements in the state’s freight handling systems.

But Kenna, who saw hopes dashed for proposed commuter rail link between Atlanta and Macon, didn’t hold out much immediate hope that passenger rail service is on any list of governmental priorities. 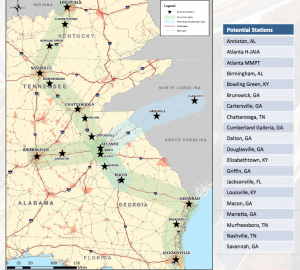 The long-discussed commuter rail line from Atlanta to Macon is within the corridors that are feasible for a potential high-speed rail network. Credit: GDOT

“As a practical matter, I don’t have a lot of confidence that Georgia is ready to make the commitment that states need to make in order to advance these kinds of projects,” Kenna said. “The irony in much of this is that this is far more important outside of Atlanta, in communities whether Griffin, Macon, or Columbus ….

“The whole concept of two Georgias is manifesting itself in this kind of issue, in that the rest of Georgia says, ‘We need to be connected to the money,’ – whether that is represented by the airport, or MARTA that connects to employment centers in the region, or the fact that Atlanta simply is the center of governmental and economic activity in the state.”

The new study shows that feasibility tests included operating ratios and benefit-to-cost ratios. A value greater than 1.0 showed the route is feasible. Here are the results:

One-way fare prices are projected at:

Revenues are forecast to exceed the costs of operations and maintenance:

Costs, maintenance and operations, in millions:

The following potential stations are identified in the report, listed here in alphabetical order: