Georgia First Lady Sandra Deal is slated to announce Monday that Georgia is creating a one-stop shop to help pregnant women and mothers of infants get all the assistance their communities provide. 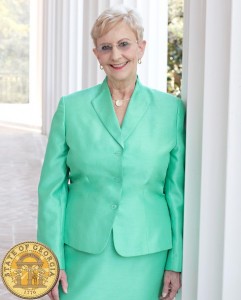 The new initiative, Great Start Georgia, aims to promote the welfare of young children by helping their mothers and others who care for them. Mother and child will be guided through the process of locating and accessing existing programs.

The Casey report had some good news: Conditions for Georgia’s children are improving in terms of health and education.

But Georgia had its share of bad news: The state’s children are economically challenged.

The proportion of children living in poverty has increased from 20 percent in 2007, which was the start of the recession, to 26 percent in 2011, according to the Casey report.

The proportion of children living in homes where neither parent has full-time, year-round employment rose by 7 percent during the same time period – from 28 percent to 35 percent.

Great Start Georgia has assembled a team of 13 entities to combat these challenges. Partners include: 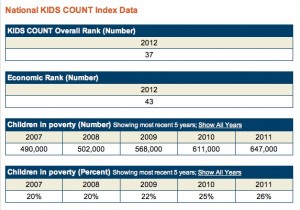 Headlines from the 2012 “Kids Count” report. Click for a larger version.

It aims to promote maternal and child health, safety, and economic self –sufficiency of families, according to GSG’s website.

The home visitation will start in seven counties. DeKalb County is the only one in metro Atlanta. The other counties with pilot programs are: Clarke, Crisp, Glynn, Houston, Muscogee, and Whitfield counties.

The initiative had a soft launch in October, when the web page was made public and a toll free hotline was activated: 1-855-707-8277.

The first lady will put the power of her office behind the program during an announcement today at the Capitol. The event is slated for 9:30 a.m. at the North Wing.

Gov. Deal has said he cares deeply about the state’s children. When the Casey Foundation released its latest Kids Count report, Deal was quoted as saying:

“This is a defining moment for Georgia—a mobilizing moment. While the news in this ‘Kids Count’ report is encouraging, it also reminds us that our work has just begun. I said from the beginning that I’m committed to our youngest Georgians, who are critical to our future.  I will continue to support communities in ensuring that children will thrive and become successful adults, despite the many challenges they face.”

Previous Article
Slashing state services again will do lasting economic damage to Georgia
Next Article
With such a great story to tell, Atlanta should share its tale with the world