MARTA GM Keith Parker got a warm reception from the GRTA board when he visited on Wednesday. 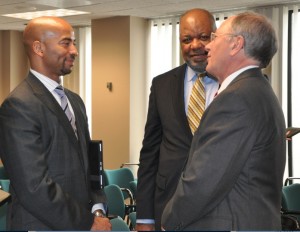 Parker made a few remarks in which in he introduced himself as a complete person – a manager who favors “low cost, high impact improvements,” a leader who’s a good listener, and a family man with three children – including one just a month old.

The visit was just the latest of Parker’s stops on his outreach tour. Parker didn’t make any grand announcements, but he did make the important effort to meet his professional colleagues in the public transit arena.

GRTA Executive Director Jannine Miller introduced Parker to the GRTA board in a positive light. Miller, who serves as a non-voting member of MARTA’s board, highlighted his past service in five states and selection as Texas CEO of the Year.

“We’ve already began to see tremendous changes,” Miller said. “The MARTA board is excited to see the changes he’s made there.”

Parker described his new job as a “pretty challenging position.” Parker said his first step has been to bolster morale among employees. 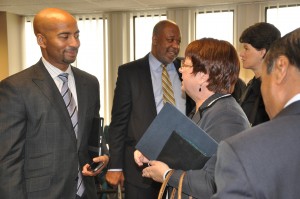 The reason Parker highlighted for the morale-building program involves the role employees play as ambassadors for MARTA. Parker said the 4,500 employees should be proud of their employer and, through their confidence in the system, convey that confidence in MARTA to friends and acquaintances.

Parker dwelled on his background with transit systems that he said provide great service at low cost.

“I’m proud of having worked for some of the most low-cost places,” Parker said. “Richmond – highest fare box recovery systems and low cost. Charlotte. San Antonio – the best in terms of cost per mile, cost per passenger.”

Parker emphasized that he needs for the GRTA board members to communicate with him. He said that he has a reputation as a great listeners, and related an anecdote that Charlotte Mayor Anthony Foxx once observed that in any conversation with Parker, Parker spends 70 percent of the time listening. 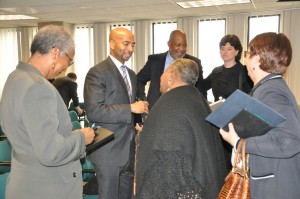 “I hope you will feel the same,” Parker said. “I look forward to a warm, positive relation.”

With that, Miller said: “Thanks to the MARTA board for the very strong process that brought him here.”

The GRTA board finished its agenda and members passed by Parker, who had taken a seat to stay for the conclusion. They all shook hands and retired to share the routine, working lunch.