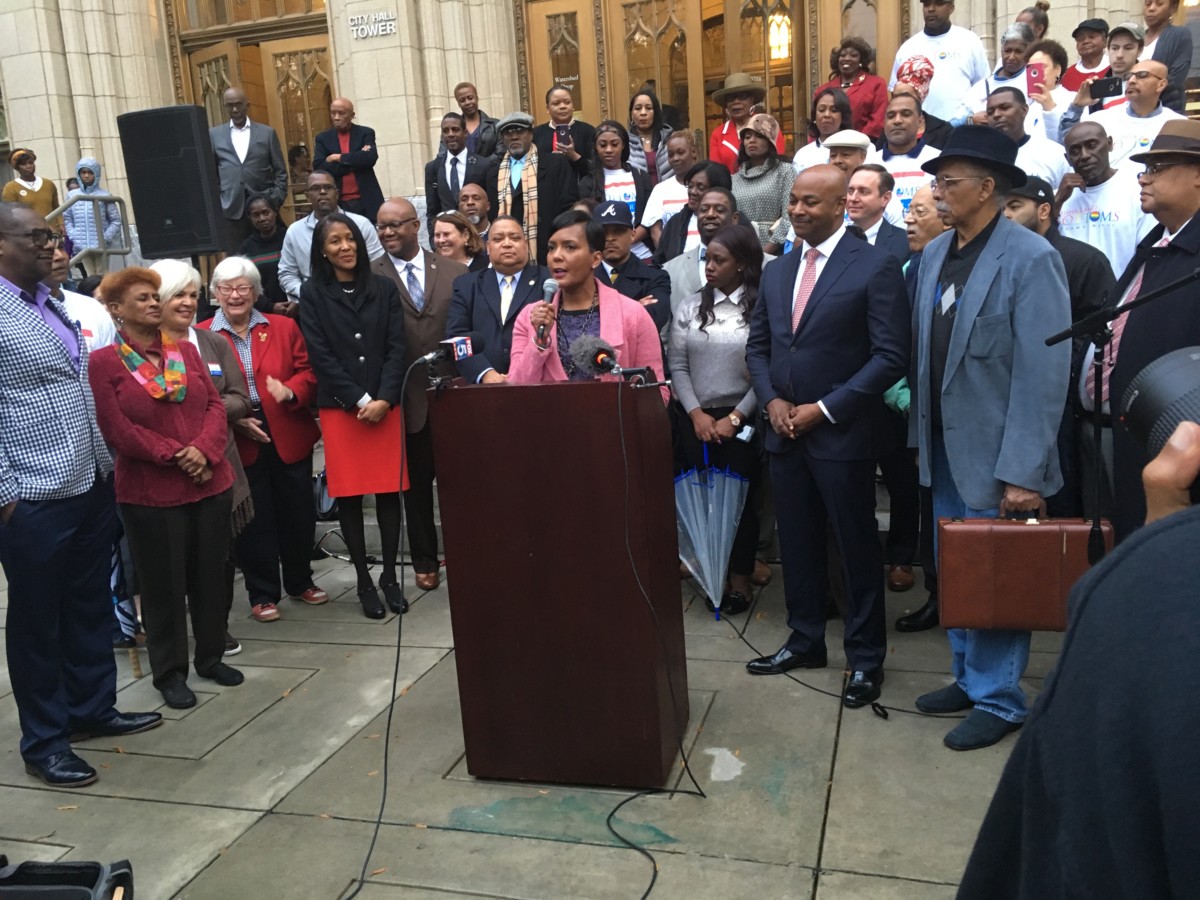 With just days left to campaign, some of Keisha Lance Bottoms’ highest-profile local political fans — and new supporter Killer Mike — took the mic on the steps of City Hall on Thursday to tell Atlanta to get out and vote for her. 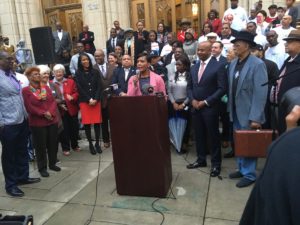 Atlanta mayoral candidate Keisha Lance Bottoms appeared at City Hall on Thursday, with dozens of supporters. Several local elected officials — and hip-hop headliners T.I. and Killer Mike — urged Atlantans to get out and vote for her. Credit: Maggie Lee

At least four members of next year’s Council support her; or at least five if Cleta Winslow wins her runoff. She, plus Michael Julian Bond, Joyce Sheperd, Ivory Lee Young Jr. and Councilwoman-elect Andrea Boone were all on hand.

“After 27 years on City Council, I am certain that we will leave the city of Atlanta in excellent hands,” Martin said, urging the crowd of some 70 or 80 people to work hard for Bottoms’ election in the few days left until the Dec. 5 election.

Young said that Bottoms has done more in her legislative capacity than her opponent and fellow Council member Mary Norwood.

Bottoms “hasn’t just sat in living rooms, she hasn’t just returned phone calls. She’s gotten active and engaged in the legislative process, in dialog not just with her colleagues but with the executive branch,” he said.

Killer Mike also came out in support of Bottoms. As a hip-hop artist, he’s critically acclaimed. In politics, he’s backed revolution in the form of Bernie Sanders and former mayoral candidate Vincent Fort.

“I’m up here telling black Atlanta and worker-class Atlanta, meaning you ain’t got to be black, but your check feels black at the end of the week, I’m talking to you, if you want someone — and we know I supported Vincent Fort first because he was the most radical and I’m going to always support the most radical — but if you didn’t choose my guy I’m going to pivot to what’s next and best. And what’s next and best is a product of radicalism.”

What that means, he said, is a woman whose father was a musician and a drug user and who went to jail, who was poorer than her fellow students in Collier Heights. 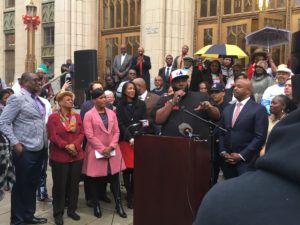 Killer Mike, at City Hall on Thursday, calls for Atlanta to get out and vote for Keisha Lance Bottoms.

“But because there was a true black middle class, kids like us could be educated in a way that was top-tier,” said Mike, speaking of Bottoms and his own history.

And Mike wasn’t the only artist-slash-businessman in the crowd. T.I. had already come out in support of Bottoms. On Thursday, he said that Atlanta is one of the only cities you can come to where people care, where you speak to your neighbor, where you can have dialog with local government. It’s what needs to be maintained in this city, he said.

The press conference came after Bottoms released personal tax records that show her  income over several years. Norwood released similar records earlier this month. Bottoms has pledged that if elected, she will introduce legislation to require all city candidates to send copies of tax returns to the city clerk.